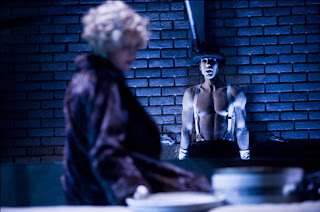 So Cabaret opened tonight at Portland Center Stage, marking the official start of season #2 in the Gerding Theater at the Armory. And it was a triumph -- a fabulous, thrilling, affecting production.

Long before opening, a continual buzz was in the air about it because of its two stars, Wade McCollum and Storm Large -- both of them Portland performing arts royalty that have fan bases well beyond Stumptown. 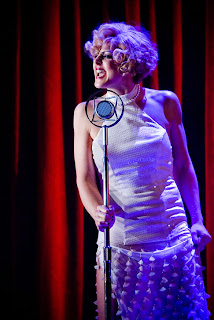 Wade excels at tour de force roles in plays like Hedwig and the Angry Inch, Rocky Horror and Bat Boy the Musical; Cabaret's sexually and politically dangerous EmCee is a natural role for him. And Storm as Sally Bowles! She doesn't have to look far for her character's objectives; in an incarnation not so long ago, Storm was living the cabaret life to the absolute max.

By the way, the photos I've included here, all by photographer par excellence Owen Carey, give you a good peek at what tonight looked like. If you are interested, there are many more photographs and good insights into what it was like to build this ambitious production at Chris Coleman's own blog. 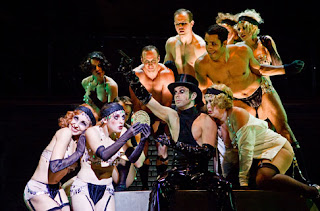 Email ThisBlogThis!Share to TwitterShare to FacebookShare to Pinterest
Labels: Cabaret, PCS at The Armory, The Psychopathology of Everyday Life