First stop in Pasadena was to meet my good friend Raul Staggs, the noted “casting guru,” as the Angels Gate Cultural Center describes him. We got together at the famed Theatre@Boston Court, over on Mentor Avenue. In only a few years of existence, Boston Court has gained a near-legendary reputation for compelling new work, so I was excited to see something in situ at last. I was in luck: the Court was running a tense, eerie new piece by Carlos Murillo (that’s Carlos Murillo the playwright, not the composer, the inorganic chemist or the boxer) entitled Dark Play or stories for boys. Carlos is an inveterate structuralist who revels in word play – repeated motifs that develop (or remain static) in a viral mode, as stories are fractured, split asunder and rejoined in meaningful ways. The title of Dark Play is in itself a reference to imbricated layers of meaning; through dialogue we find out that the term comes from psychology, indicating a game of sort in which one player know he’s playing, and the other…does not. 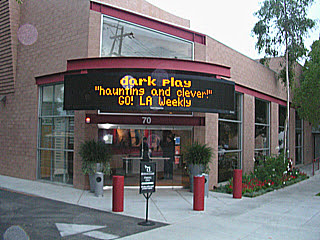 As directed by Michael Michetti, the production was outstanding on all levels. I felt privileged to see it.

Later I met with Bryan Davidson, a playwright and literary manager I knew from A.S.K.’s golden age, way, way back in the 20th century. Between Bryan and Raul (another A.S.K. vet) I came away fully updated on L.A theater gossip. And later still I reunited with the fab Jessica Kubzansky (co-artistic director of the Boston Court, along with Michael Michetti) and later still with friends from the old neighborhood.

The Big Event, the reason for this whole descent into the L.A. megalopolis, came that evening: the workshop presentation of Part Three of Nancy Keystone’s epic work in progress, Apollo. By the time I arrived around 7:30 (with the performance slated for 8), Diavolo’s dance studio was already thick with groovesters clamoring for a seat. I was impressed but also intimidated; nearly everybody was wearing the same black pants. Was it going to be an arms-folded, ok-now-wow-me sort of crowd?

I need not have worried. A festive air suffused the studio lobby, like everybody felt as fortunate to be there as I did. For me personally, it was a lovely homecoming to recognized so many theater luminaries: Nike Doukas, Camille Saviola, Leo Marks, Angie Kim, to name just a few. Most thrillingly for me was getting to hobnob with the elegant and courtly Laural Meade, the playwright/provocateuse whose performance constructions I remember so fondly.

But the performance of Apollo. Brilliant. A thrill to recognize certain sections and motifs, which were experiments for Nancy during her Portland residency, now fully developed. And of course there were entirely new sections, one of which was deeply moving – something you don’t expect from intellectually layered work like this. I came away wishing to speed the clock up to the world premiere of the play, in January of 2009, when we’ll see all three parts performed together for the first time.

About 20 people stayed behind for the talkback I moderated, and the audience turned out to be warm, smart and supportive. Nancy's science advisor participated, and was cogent, humorous, sanguine. In him I could see the Sloan Foundation's vision at work -- Sloan seeks to put a public face on science and the scientists who seeks to advance human knowlesge, and they could hardly have found a better rep than Craig Peterson. In addition to being an engaging personality and a compelling speaker, the guy has the best title in the universe: Spacecraft Systems Engineer. That's his actual title at JPL. I was ready to beam up on the spot.

By the way, Apollo's premiere will be one of the linchpins of Portland’s first-ever citywide New Works Festival. Stayed tuned for details about that.
Posted by Mead at 11/22/2007 08:47:00 PM

I can't wait to see it. It'll be nice to see an example of Sloan's mission that isn't anything like 'Proof.' BLECH!!! I hate that play...