Heartland THE END for now 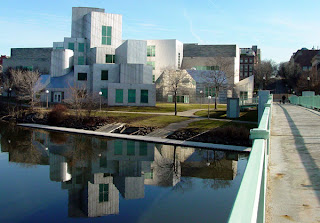 Attending the Iowa New Plays Fest wasn’t all just watching shows, strolling under the redbuds along the river and marching into town for coffee, just so you know. After every production and reading, the Festival guests met with the playwrights and their collaborators to talk about whichever play we’d just seen. And since most of the writers also met privately with the guests….that’s a lot of meetings.

And why not, right? The beauty of the system is that the guests are far, far from home and they’re in Iowa with the sole mission of responding to the work they’re seeing. No distractions. Or, well. Morgan, John and Wendy had their Crackberries to plug back into whenever a meeting ended, but they certainly gave of themselves generously in the meetings, be they group or personal.

A case in point is Seven Dreams of Her, a remarkable play by graduating playwright Sarah Sander. Taking place entirely within the dreaming mind of the main character, the story concerns the rise and demise of a triangulated relationship between two women and a man. And it tells it story by looping around the same Gordian knot again and again, as in a musical fugue, while the dreamer tries to sort out what happened and to begin healing from it.

As directed by Sarah Ballema, the set was an austerely gorgeous dreamscape with a bright red tree for a focal point, extending from the stage floor up into the fly space, out of sight. Late in the play, when one of the characters starts uprooting this tree, it’s a shocking moment – will the tree float away now? The play is replete with moments like that.

Because of its complexity, Seven Dreams of Her could have been very hard to speak to individually – in each case, the respondents would have been coming from an idiosyncratic POV. But because we respond to each others’ thoughts as well as to our own, this wound up being a great discussion. In particular I recall we discussed a graph that’s seen briefly on a chalkboard during the play (the protagonist is a mathematician) in which a length of a curve function is missing. And that a quote preceding the play, in the script version, mentions that standard procedure in solving an equation is to isolate one variable from the others. We tease out this idea, and Sarah agrees that while the idea was central to her writing the script, it has turned out to be nascent in actual production. And so on to re-writes. I felt she left the discussion know the respondents were unanimous in their excitement about her script, and that she now knew how to privilege the parts of her play she most wanted in the foreground.

As always, Art was there to direct and redirect the discussion, and Dare Clubb framed the conversation for us. I looked at all the playwrights assembled there, Sarah and her colleagues, and wondered if they had any inkling of how rare discussions of that depth are, once you’re out of school. Decades after my own graduation, I still miss them.
Posted by Mead at 5/13/2008 12:46:00 PM

So great to read all this Mead, I feel nostalgic as so many of the plays were worked on in my class last year. Very proud of these writers! Thanks for writing about them. Keep in touch, LISA D.

Your influence on the Festival was everywhere, Lisa -- I loved hearing so much about you from the playwrights. They're all hoping you'll be back soon.