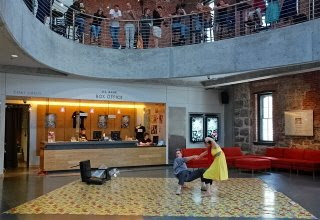 Meeting Connie Congdon and seeing she really does look like a red-headed hobbit, just as she said.

The excellent turnout for each of the Made in Oregon plays. And meeting Gregg Olsen, who came down from Olalla to see Ginny Foster’s adaptation of his novel Starvation Heights. And Matt Zrebski’s perfectly pentatonic music for his own play, The Cloud-Bangers. And blushing during Hunt Holman’s Willow Jade upon hearing the single nastiest line I have ever heard uttered during a play.

Beach Day on the Oregon Coast, which lived up to its reputation as craggy and chilling and gorgeous.

A particularly endearing edition of Commission! Commission!, graced by the talents of Joe Fisher and Carlos Murillo and David Adjmi and seven more outstanding writers. Storm being commissioned to sing a paean (written by Sam Gregory and composed by Rick Lewis) to fabulous food writer Joan Cirillo, and Marc Acito capping the evening by auctioning himself off and writing a hilarious play on less than no notice.

How well Storm Large’s work in progress, Crazy Enough, turned out! And sharing a moment afterward with director Chris Coleman when we were too shattered to talk about it.

The Flash Choir performing a vocal recitative on the Armory’s stairs leading up to the mezzanine in which they sang the title of every play that’s ever appeared in ten years of JAW Festivals – and seeing Rose Riordan get verklempt over the performance.

The line for Storm’s workshop snaking all the way around the corner on Eleventh Street and down into Vera Katz Park. 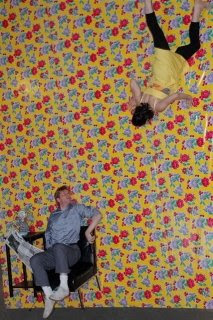 Lane Hunter’s charming dance piece, inspired by Donald O’Connor’s famous scene in Singing in the Rain. You could look down at the event from the mezzanine and look at a video projection of the piece as Lane performed it – giving you a totally different parallax. From the video vantage, it looked as though the dancers were flying up from the chair and climbing the walls like geckos.

The eerily apt curtain raisers written by the four Promising Playwrights especially for the Festival (one of whom was excommunicated from his family as a consequence, apparently for writing a piece that cut a little too close to the bone).

The playful spirit of invention that writer C. Denby Swanson and director Jason Neulander infused into the reading of A Brief Narrative of an Extraordinary Birth of Rabbits, in which the stage directions reader served as the script’s impresario.

The closing seconds of Senator Congdon’s Paradise Street, when you realize the play was always bringing you inexorably to that very moment.

The felicity of PlayGroup’s Ten Tiny Playlets zombie musical piece making mayhem in the Playwrights’ Slam. And the poignancy of member Althea Hukari gamely showing up to see it, so soon after her father’s death.

Being too moved to moderate the talkback for Carson Kreitzer’s Enchantment and somehow pulling it together anyway.

congrats to you and all the JAW folks. What an awesome year you have. I am already anticipating next year! So, get crackin'! Oh alright, take a couple days off, you deserve it.

You know, I've spent my entire career trying to get excommunicated from my family.

It's been a few years since I came to JAW but I just loved the festive atmosphere you all have created. What fun to be part of it. Some of the plays weren't my cup of tea, but that's what we love about the theater, right? Good to see you, Mead!