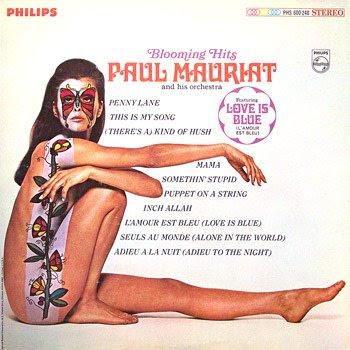 Yeah. I know. But if you think I’m wearing out my welcome with this trope, consider yourself lucky I spared you my ongoing rant about the ruin of arts philanthropy here in the wild wild west.

All right. In order of my exposure to these albums:

Music To Have Fun By. I have not been able to find any trace of this wondrous album, which I checked out of the public library when I was about 10 years old because it sported a thrilling cover illustration of a woman seated atop a vinyl LP spinning off into space. She looked delighted, and so was I. This was all classic compositions possessed of a kind of delirious abandon: The Sorcerer’s Apprentice, Flight of the Bumblebee, Funeral March for a Marionette, The Age of Gold – you get the idea.

Love Is Blue, by Paul Mauriat and his orchestra. Ya – muzak, essentially. But for you kids who weren’t around in the 60s, muzak used to be a big band affair, very elaborate. You don’t know what vertigo is till you’ve heard “There’s a Kind of Hush” performed in cut time by an 40-piece band.

The Mamas & the Papas. So sweet. So California. So 1966. “You gotta go where you wanna go / Do what you wanna do / With whomever…..” That sounded pretty good to a callow high school freshman. 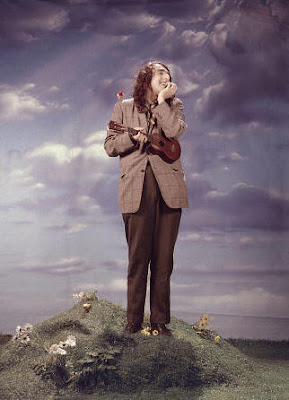 God Bless Tiny Tim. Released in 1968 and spurred to success by Tim’s greatest hit, "Tip-Toe Thru' The Tulips," this was widely supposed to be a novelty album. Yet it surprised people with its musical references to a more post-war sound – something The Beatles wouldn’t assay for another year.

Hair-- the original cast album. Talk about an education. Much to my parents’ disapproval, I studied this album carefully, mining every reference to sex, drugs and sedition. Conclusion: counterculture = fun!

Moody Blues – In Search of the Lost Chord (1968). The start of my “psycho-pukey” period, according to my scornful friends. This stuff has not aged well, and even in my youth it was wiped from my consciousness by the belated discovery of the bands mentioned below. But like all teenagers, I was terribly, terribly earnest about my quest for a spirituality that Catholicism could not begin to address. 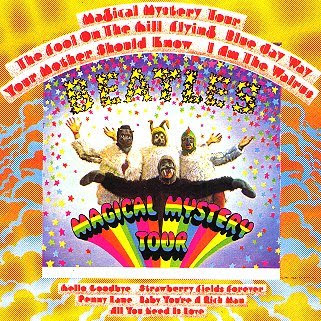 Magical Mystery Tour. The Beatles were all about celebration, and perhaps never more so than with this wonderful feat of George Martin’s producing genius. He was immortalized on the inside cover, where the liner notes began, “Once upon a time there were four or five wizards….”


Aoxomoxoa, by the Grateful Dead. I didn’t know what the hell they were talking about. But man was it groovy.

Tommy. The Who. Surprise! You could do theater and be cool. 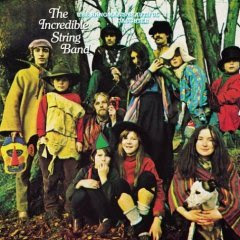 The Hangman's Beautiful Daughter, by The Incredible String Band. Still my favorite album of all time, recorded in 1968 but not discovered by me until 1972. Either this album gradually takes you over and seizes your imagination, or you find it completely unlistenable; more than one friend has asked me to take it off the record player. Forever. But 37 years after my first listen, it still speaks to me. The layered sound was very much a production of its day, but its multicultural approach to music was decades early; it used instruments from all over the world, including sitar, gimbri, shenai, oud, harpsichord, panpipes and kazoo. But the lyrics were like peat moss and dark woods and autumn mist – as clear an evocation of the so-called British Isles as you’ll ever hear. 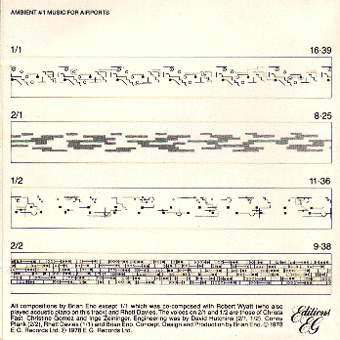 Music for Airports. Brian Eno’s anti-commercial music, designed to counter "the products of the various purveyors of canned music.” Later efforts would be so minimal as to scarcely exist, but I still listen to this quietly moving album. Eventually it fulfilled its ostensible purpose through its installation at the Marine Air Terminal at LaGuardia. 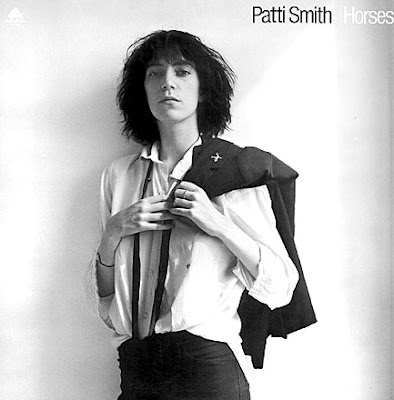 Horses. Patti Smith. My first inkling that The Bee Gees had not spoiled music for all time. Plus who knew punk (or anyway one of its first descendants) could be so sexy?

Elvis Costello – his very first album, My Aim Is True (1977). Proof positive that being pissed off was a viable career choice.

Are We Not Men? and Duty Now for the Future. As with Tiny Tim, Devo was widely assumed to be a hoax at first. I loved their reckless energy – “the important sounds of things falling apart,” as the Spud Boys put it. 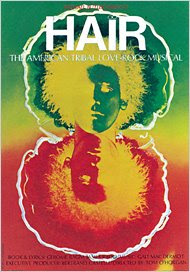 Email ThisBlogThis!Share to TwitterShare to FacebookShare to Pinterest
Labels: Music to have fun by

I love your choices. I'm a fan of The Incredible String Band too, but know that it can be grating or incomprehensible to many. I saw "Hair" on the London stage when I was 14 and had hair to my shoulders--my parents were brave people.

Thanks, MTC. It's turning out fans of ISB abound -- John Steimkamp, for one, and of course my intrepid Cousin Tabitha.

Stepping back from my own list, I'm surprised to notice how many of them come from 1968 or close to it (including several that I ran out of energy to mention). Surprised, I mean, because next to none of them were discovered in that year; some I didn't get to know till many years later. Yet mething about that year was magic, apparently, as least for me.

Not to be cute about it but 1968 was both tragic and magic for so many of us. Pivotal.

I was just thinking the other day what a difference it's ended up making in my own life that Robin Williamson went off to Morocco when he did. And he's never even heard of me. I like that.

And then today before reading your post, I saw some crystallized ginger at the store and I thought of you.

Funny your mentioning "Search of a Lost Chord"; never having been much of a fan of the Moodies (though "Nights in White Satin" brings out a Byronic melodrama in me...one feels like one should be draped naked in shmmering sheets a Venice hotel whilst smoking opium and writing with a quill pen), I still have a tremendous affection for those dive-bombing "swoops" on "Legend of a Mind" that take me to a particular (and peculiar) time and place in life. Not everybody will understand, but let's just say, with the proper "frame of mind," there are unforgettable pleasures to be had listening to this album while looking at candles through a crystal wine goblet. And we'll just leave it there.

And thank you for the Elvis Costello: for those of us perched between the Boomers and Generation Xers, it's hard to explain how important this and "London Calling" were a Our Music and Good, damn it.

Christ. I'm going to have to do this one aren't I?

Steve, I thought you'd never take the bait. Yes, you must do this exercise, if only to satisfy my curiosity. I'm hoping MTC, who has a whole blog devoted to music, can be pressed into service as well.

Originally the thing was one of those Facebook chain letters, where you spill your guts and then tag 15 hapless friends who are supposed to follow suit. So I'll proceed to do that, just so you can feel especially beholden.

What will you list, I wonder. I'll go out on a limb here and predict you'll not be extolling Celine Dion.

Well...that was too much fun. And now I'll be thinking about it for the next three or four days. I kept thinking quirky singles ("Downtown," "The Drugs Don't Work," "Life in a Northern Town," etc.), but had to go to albums just to focus. Might be a few surprises there.

"My Aim Is True" is a stellar album--and the bonus discs on the subsequent reissues are full of gems as well!

Right you are, Prince. I re-bought the album on CD (I still have it on vinyl, that's how ancient my collection is) just to have those cuts. I wish they would reissue Elvis's slow version of "Accidents Will Happen," which was weirdly moving...

And CC, thanks for "Let the Sunshine In." I hadn't heard the movie version in this particular century yet.

It's not even about journalism, but when I was working 12 and 14 hour a day as a reporter, I can remember coming home blown-out exhausted from work, pouring a glass of whiskey, lighting up a cigar, and sitting on the back porch and listening, over and over, to "Oliver's Army" off Costello's "Armed Forces" until I could finally let loose. It was just the perfect song for a certain place and era...one of the wonders of music that it can seem so perfect at certain times in your life that you almost feel like it was written for you. With greatest snotty phrasing since Dylan:

"But there's no dang-er
It's a pro-fes-sional ca-reer
But it could be arranged
With just a word in Mr. Churchill's ear
If you're out of luck you're out of work
We could send you to Johannes-burg..."