A Night at the Drammys

Is it just me or was this a particular wild Drammy ceremony this year?

Once again, I’m happy to report that bloggers more quick on the draw than I am have already covered the particulars, including Alison Hallett over at BlogTown and the ineffable culturejock at Culture Shock. But neither reported on the radiant nimbus sported by Megan Ward, which was so glam as to hold its own against the evening’s other goddess, Storm Large (our tattooed answer to Grace Kelly).

So now I’m free to talk about my favorite part of the evening: myself.

Again this year, the fabulous people at the Portland Area Theatre Alliance hosted a segment of the ceremony called The Spotlight Awards. These are kind of like Portland theater’s version of the People’s Choice Awards; in truly democratic fashion, any PATA member can nominate people who aren’t usually recognized in awards ceremonies: stage managers, for instance, and crew members, and … others. 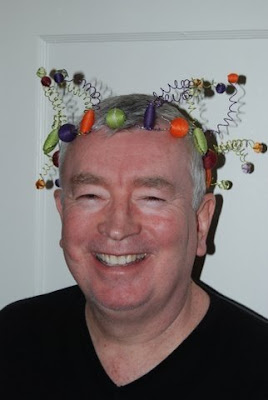 While I’m as “other” as they come, nobody told me I’d been nominated. By that point in the ceremony, my mind had wandered briefly…I was thinking about the ancient Hitchcock film, Notorious, which I had just discussed with Marissabidilla a couple of nights before, and I wondered if it could be useful to me as I continued to tinker with another Bluebeard adaptation, Gozzi’s Zenobia…

Then all of the sudden I heard my name, and Megan jumped out of her chair and there was all this racket and I thought Oh no, now I’ll have to go up there. So I did, but it was flummoxing in the extreme because I didn’t actually know what I was going there for at that moment. Jen Raynak crowned me with the lovely tiara you see at the right (hand-made by herself), and I said thank you to the microphone and I fled.

Now I regret that; probably I disappointed some people by not saying a few words. (Though no doubt others were grateful.) So I’ll say a very few words now. Now that I know what the distinction was for.

Theater folk of Portland: it means everything to me that you wanted this award to be an encouragement to me. To say you’re proud of me. Because I’m proud of you, too. In the U.S. we have several cities with theater scenes that reflect what’s unique about where they are; I wonder if you realize that Portland is that way, too. There’s nowhere like it. And over the past seven years I’ve seen it grow and knit together till it’s become the city’s last big secret, invisible to many of its citizens but beloved by those have sought it out. I know that many of you could work in bigger markets and more glittery venues. But you choose to be here, and I’m grateful for that.

Gertrude Stein once wrote that personality reflects landscape – you move to San Francisco or Los Angeles knowing that an earthquake could kill you at any second, or instead you stick with certain Midwest states where you can be sure nothing will happen to you for the rest of your life. What does it say about us that we choose to live in this green corner of the wild, wild west? In the shadows of volcanoes, in a greenbelt between an ocean and a desert? I think it’s something to do with the DIY, rough and ready ethic of the Northwest – that sense that BY GOD I have something to say and I want to say it where people just might listen.

Seriously, more days than not I think about how lucky I am to live here and to work alongside tireless and dedicated artists who are so incredibly singular. I applaud your individualism, and I’m also gladdened that you can temporarily give it up when it really counts.

Like everyone else in the room, I leaped to my feet when your name was called and began clapping. What I hadn't realized was that in the meantime my entire left leg, from hip to toe, had fallen asleep, and I found myself wobbling and almost doing a nose-splat on the back of the chair in front of me. Fortunately I managed to even my keel. And got back to what seemed like the most heartfelt, sincere applause of the evening. CONGRATULATIONS!

Mead, that was so cool, and I am so glad that I could be there to experience it. How wonderful it must have felt to receive such an ovation, and I'm glad to hear that you actually did enjoy it -- I feared that you were somehow embarrassed by the whole thing, which is the only reason I didn't mention it specially in my own blog.

Clothed with the heavens, and crowned with stars.

I wondered whether there'd be something for you at the Drammys this year. I enjoy knowing you enjoyed it.