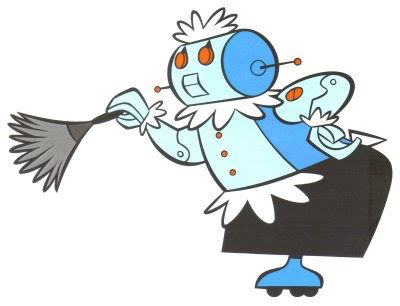 That’s right, I’m breaking a 9-day silence to bring you funny videos from the Internets. But it’s in honor of an event of massive impact. Namely: last week the James came home with a Roomba! We welcomed it into the family immediately and life hasn’t been the same since.

While the Roomba may be a far cry from the Jetson’s beloved Rosie, it doesn’t sass you back when you push its CLEAN button. It sallies forth from its berth at once, with encouraging alacrity, looking for lint, grit, dust bunnies, what have you.

What makes its search oddly lifelike is that it doesn’t go in a straight line, but rather meanders all over the place. It halts in mid-stride and goes off in another direction; it circles around madly as if in doubt of where it’s needed most; it clambers over low barriers such as rugs in a way that’s reminiscent of the Robinson’s old Chariot. Whenever it bangs into insurmountable barriers, it just wheels around goes another way (as we say in casting, using whisker-like feelers that jut out from the undercarriage.

You can place small electronic posts around the house to ward the Roomba away from places you want it to avoid -- like your office, when you’re working in it -- and the thing somehow senses areas where the floor drops away, which saves it from falling down the stairs. Brilliant! You just turn it on and it industriously wanders around; its white noise because an unobtrusive soundtrack to your day.

Best of all, when the Roomba gets tired, it finds its way back to its berth; it backs in, settles down, and as it recharges, it’s “clean” button pulses like beating red heart. Scary!

Admittedly, I had hoped for a video-worthy response to the Roomba from Mac the Kerry Blue. I expected outrage from him at this manic interloper, or at least for his terrier instincts to kick in. But he just looked at the thing, shrugged, and went back to sleep. Hence I’m hoping you’ll be satisfied with this YouTube office fave instead.

Oh: I hope you recognized the important cultural referent in this post’s caption. I know Prince did. Here it is, for your convenience, just in case:

Email ThisBlogThis!Share to TwitterShare to FacebookShare to Pinterest
Labels: Roomba

So, how does it do with pet hair? I may just have to get one!

Apparently there's a special edition that specializes in pet hair ---!!!

I had high hopes that it would work as a Jack Russell Terrrier tormentor...

Oh, Mead, you having a Roomba is surely a sign of the impending apocalypse.

Well, the world be damned as long as you're happy, I suppose.

PG/OG, am I regarded as such a Luddite that I would never be supposed to pop for a convenience like this? Splain.

Innerestingly, since posted this bit about the Roomba I've been assailed by people wanting me to plug their stuff on this site. Apparently the assumption is that Roomba must have paid me to sing like a canary. If only!!

Regarding the silence to which you refer at the start of your post, I thought you might enjoy: