Contrarian that I am, I’m probably the only person you know who wasn’t bowled over by Billy Elliot the movie. Sure, there was plenty to like about the Stephen Daldry vehicle, and I enjoyed it well enough; but instinctively I resisted its multiple attempts to wheedle more and more saltwater from my overworked tear ducts.

Imagine my bemusement, then, when the musical version (also directed by Daldry, with music by Elton John), now playing at the Keller as part of the Broadway Across America tour, was fun and impactful. Big surprise for me: while the musical version has its occasional lapses into Broadway hokum, it actually carries a great of political punch. More about that in a minute.

The play’s narrative strategy involves a lot of plot gapping; it’s clear its devisers decided that since nobody but nobody was showing up who hadn’t seen the movie, they could just drop the pretense of cogent storytelling and hit the high points without further fuss. Hence, for instance, Billy’s love of dance is a big secret in Act 1, and then suddenly whole town knows about it in Act 2. How’d they find out? Who cares! We just want to be there when Billy triumphs. 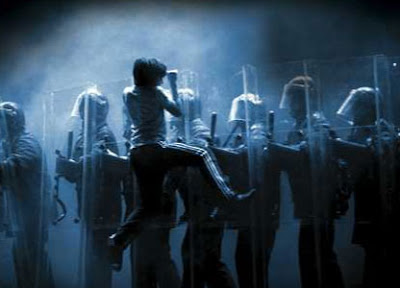 But this is not to say the book is weak — far from it. As adapted by Lee Hall from his own screenplay, the ongoing struggle of the striking miners is no mere backdrop to Billy’s individuation; the two go hand in hand. The boy’s immediate victory coincides with the strike’s collapse and Thatcher’s successful gutting of a whole way of life — along with the livelihoods and communities that relied upon it.

The musical’s actually at its best when it portrays those struggles through all the resources at its disposal. Of special note is the muscular choreography by Peter Darling, which often interweaves constables and miners to taut effect. During the lighter scenes, this sense of worlds in collision is even joyous, as when a chorus of police backs up a class of young ballet students in a way that makes us laugh yet which also honor the athleticism of dance.

My favorite scene, though, involves a village holiday party and pageant, where the company sings “Merry Christmas, Maggie Thatcher” and brings down the house with a colossal Maggie puppet whose grasping, gnarled hands reach out to the audience like she’s coming after them. That gives you an idea of where the script’s sympathies ultimately lie. And in that sense, the story cuts even closer to the mark then it did when the movie was released 11 years ago.

(A quick aside here: Lee Hall, who wrote book and lyrics, is a terrific British playwright whose hilarious and affecting play Cooking with Elvis will make a fortune for the first Portland theater that dares to embrace the script’s uproarious, scabrous and racy sense of humor.)

Usually you have to be quick to catch the Broadway tours as they sprint through Portland, but Billy Elliot the Musical plays here through April 17. Go see it if you can; it’s worth it. Try for mid-orchestra seats, where you’re close enough to see faces but far enough back to take in the whole stage at once. There’s a lot to see in this show, and you’ll want to see it all.
Posted by Mead at 4/08/2011 10:57:00 PM

Email ThisBlogThis!Share to TwitterShare to FacebookShare to Pinterest
Labels: Billy Elliot the Musical