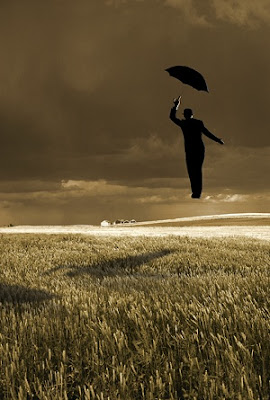 Blame it on Inception, I guess, that silly video game-cum-action movie. In 2010 it made pop hash out of the idea of lucid dreaming. And now, premiering tonight, is a new broadcast show (on NBC) called Awake, that takes up some of these notion and adds its own twist. Suddenly this once obscure phenomenon is everywhere.

What is lucid dreaming? Very simply, it’s about cultivating a presence of mind, during the dreaming state, so that you realize you’re dreaming while you’re still doing it. This is more momentous than it sounds — because once you attain that realization, you have the apparent ability to manipulate the elements of your dream. And that can be fun, or terrifying, or revelatory. Or all of these at once.

There’s a ton of stuff on the interwebs about this nowadays. Forums, support groups, numerous how-to guides. For some people, simply becoming aware of the phenomenon induces it the next time they sleep. For many, however (such as in my case), it takes a lot of practice and self-discipline to get underway.

In recent years, there has been so much emphasis placed on the fun-and-games aspect of apparently controlling your dreams (e.g., flying around the cosmos, walking through walls, breathing underwater, etc.) that a new level of engagement is now underway. Sometimes referred to as advanced or conscious dreaming, this new society of oneironauts leaves the dream manipulation to the newbies and instead favors letting the dream take you where it will.

Essentially, this new paradigm asks: who, exactly, is doing the dreaming? You can best explore this gigantic existential question by querying the dream itself. If you encounter a dream figure who looks an awful lot like your deceased Aunt Clara, for example, you can ask her: what do you represent? Why are you here, what do you want? Or, to be more abstract about, if you find yourself in an inexplicable setting like an open field or an unpopulated city, you can just say to the open air: why am I here? Often the responses are out-and-out epiphanies.

So what of the pop versions of lucid dreaming? While most of Inception is sheer fantasy, there are people whose authority I trust who have indeed had group dreams, in which several people seemed to be present together in the same dream location. In theory, this happens to you every night, but doing this consciously and with avowed intent is advanced dreaming indeed.

Awake is an interesting case. In this plot line, a man (played by Liverpudlian actor Jason Isaacs, a perfect James Bond sort if ever there was one) has had a car accident in which either he, his wife or his son were killed. Every time he wakes up, he flips between a reality where his wife is alive and the son is dead, or the other way round. In each reality, he has shrinks (played by Cherry Jones and B.D. Wong!), each of whom insists he gives up the other reality if he’s ever to be mentally stable again.

The parallel to lucid dreaming here is that while lucid, the sense of its reality can be absolute. In terms of how vivid and palpable the experience is, everything can seem to be totally real. And almost any lucid dreamer can attest to the unsettling instance of the false awakening, in which you come out of a dream and start your day only to discover at some point that in fact you only started another dream—one that began with you waking up in your own bed.

There are scads of techniques for coping with this. If you’re ever out and about and you see someone perform certain actions—such as checking the hands (which tend to morph in dreams), snapping a rubber band against the wrist, or even whispering “Am I dreaming,” you may have just witnessed somebody performing what’s called a reality check. The hero of Awake has evolved similar methods to track which of his dream realities he’s currently visiting. Apparently lucid dreaming has gone mainstream.

Anyway. Media glosses on the experience aside, I recommend two good books on the subject, if you’re interested. Robert Waggoner’s Lucid Dreaming: Gateway to the Inner Self advocates junking the illusion that you have control over your dreams in favor of allowing them to divulge their meanings. And Robert Moss’s Active Dreaming has some excellent approaches to what’s known as dream incubation.

Since childhood I've had nightmare dreams involving out-of-control elevators, but by the time I was in my 20s I had learned to stop them. Before I got into the dream elevator, I'd turn aside and take the stairs! The nightmare never morphed into, say, out-of-control staircases, so I effectively put an end to my nightmares. On the other hand, I used to dream of myself flying--a wonderful feeling--and those dreams are now gone. I'd love to get them back. Thanks for the post, Mead, I enjoyed it very much.

You're very welcome, Molly. And one way to reconnect with the flying dreams could be through the dream re-entry technique. Here's one approach to that method:

Often this is used by people who want to revisit a dream that mystified them, but I have used it just to return to a moment I especially loved or valued.

Needless to say, the way a revisited dream evolves can be fascinating. Good luck!

I've never experienced lucid dreaming, but I love the idea of it.

I also loved the film Waking Life. One of Linklater's best I think.