Days to go before it’s 2008, I realize, but already I’ve resolved to devolve in the coming year. There’s something I’d like to do a lot less, and it’s a something that’s frequently regarded by others as a signature of sorts for me – my smile. 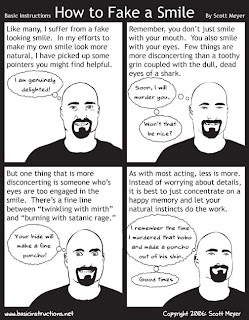 The impetus for this, you ax? It comes out of a conversation I had a while back with Adam Bock. Now Adam is not a smiley kind of guy, in my opinion, but it came out that we came to feel we both offer up our smiles too much and too easily, as a reflex. Adam observed that it’s a trait endemic to gay men in particular – smiling as an act of submission, a way of saying “see, I’m harmless.” Just as so many gay people wind up in helping professions as an unconscious way of self-justification (“I make an important contribution to society”), so too does the self-deprecating smile telegraph that the smiler is soft and toothless and not worth attacking.

Also, because society tends to look on smiling, friendly people as weaker than their more impassive counterparts, smiling for gay men can broadcast an acceptance of their own second-class status.

There is a study related to this, which John Tierney quoted in The New York Times earlier this year, that speaks to this bias:

While we typically think of a smile as displaying our emotional state (happiness), it also appears that smiles convey information about the signaler’s status. Specifically, lower status individuals appear to smile more than higher status individuals. I suspect that this is due, in part, to the fact that there are several different types of smiles, including a true happiness smile and a true embarrassment smile. The latter smile, the embarrassment display, is often seen as an appeasement display in primates. Jimmy Carter smiled a lot, George Bush smiles much less. Jimmy Carter is generally perceived to be warm and friendly, but not very dominant and strong. George Bush is perceived be somewhat less warm and friendly, but is seen as quite dominant and strong.

Not that we shouldn’t smile at all, thank heavens people do. But for me, well . . . it’s a habit I’d like to break. And let me add that (notwithstanding the illustration I chose to accompany this post) I’m not saying my smile is fake or forced, I’ve just come to the point where I distrust my very readiness to smile. To always seek to blend with others, to pacify, to help and to cheerlead.

Well, you know I've spent most of my life blaming Adam for everything. So FINALLY I have permission to do so. For that, Mead, I am eternally grateful.

Hmmm... Funny. I've always thought of your smile as being indicative of a very basic self-confidence on your part, never submission of any kind. Then again, I am very manly. Maybe you were submitting to me, and I just didn't notice. A pity. Manly men love shows of submission. ;-)

Touche! A hit, a palpable hit, the point envenom'd. Ouch. Gentleman, you all three touch home in one way or another. No one wants to be more like George Bush, unless it's creepy Karl -- oh wait, even he has dumped Bush. But my point was that some people regard smiling, and even willingness to be friendly in general, as a sign of a weak person who can be taken advantage of.

I'm encouraged to hear that my eternal smiling might convey self-confidence -- and indeed I'm not TOTALLY insecure, never mind all the evidence to the contrary on this very blog -- but often chronic smilers like me have learned to blend into the wallpaper as a survival skill. Sometimes the smile is a symptom of that, and it's hard to unlearn.

As for the manly art of scowling, Patrick, those new photos on your blog are scary indeed. They're too manly, take them down! They're freaking me out on acid!!

What an absolutely fascinating observation. I always assumed you smile because you're at peace with yourself. And that's always put me at ease in your company. I'm not much of a smiler--a laugher maybe, but smiling not so much; in fact, my wife occasionally refers (affectionately) to my "little scowling face." But, man, if I thought it'd make the world a better place, I'd take smiling lessons.

Yes, I seem peaceful, but inside I'm a raging torment.

Well -- not necessarily. There are many, many times when I smile because I feel good, or I like the people I'm speaking with. But just as often I do it homeopathically, because I'm nervous or unsure. And I often do something I consider particularly incongruous, which is to smile when I'm talking about something very painful to me. I used to think this was a trait peculiar to women, now I'm told it's men that tend to do that.

I've had friends who were shocked to find people thought they looked perpetually angry. Odd. Eyes may be the windows of the soul, but so often the face is a mere mask.

What an amazing topic. To me smiling has always seemed such an involuntary act that to manipulate it would seem transparent and insincere. True, we all force smiles at times to cover our real emotions, and it always reads a mile away. (at least to me) I've never seen you do that. And if smiling seems submissive, I would rather that than the false bravado of a George Bush. (that piece of shit...sorry, I always have to say that when I type his name.) There will never be enough smiling or laughter in the world. We're fucked if it stops.

Well said, Shel. And thank you for saying it. I'm down for the count with a vicious cold (I tend to save colds for these lovely long weekends, it's the workoholic in me) so some affirmation is most welcome. Cheers, and Happy New Year to you.

Well, Mead, all I can say is you have us fooled.

I have always taken your smile as an indicator of all the positive things people have already mentioned about you.

But far from submissive, you come off as a leader of the first rank.

A friendly, inspiring one - not one of those "Ok everyone listen up because I AM NOW PREPARING TO LEAD YOU!!!" types clamoring for people's attention.

And you can't fake that. You either are one or you aren't.

You have a way of putting people at ease, getting groups going - creating social cohesion.

And from afar it's very noticeable that you treat every person with respect.

All those things are tied up for me with your smile. And yes it is a signature!

So if the smile goes - please don't lose those other great things!

Aw shucks, Win. Thank you for the kind comments. Much appreciated.