So this is Bob Hicks. 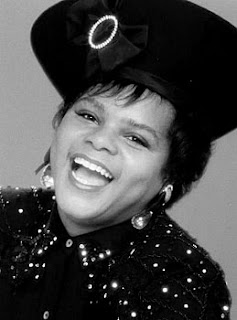 If you search for "Bob Hicks" on Google Images, a bewildering plethora of photos appear, none of which is Bob. My favorite is the most inexplicable one, of course -- this picture of the popular crooner Linda Rodney. Qu'est-ce que c'est, eh?

To clarify, none of the images that pop up are our Bob Hicks. There are numerous other personages claiming to be Bob Hicks, but only our Bob retired from The Oregonian last Friday, after decades of service to that paper and to the theater commmunity as Portland's leading arts and culture journalist. In an outpouring of appreciation, the theater community (as organized by Sherry Lamoreaux, Mary MacDonald Lewis and others), took out a colossal ad in the paper to which Bob contributed so much. Contributions beyond what the ad cost were sent to PATA for its Valentine Fund. Sherry as reported the outcome of all this on pdxbackstage.

As part of our BobFest, I wrote a short piece for The O, which it never actually got round to ... running. Harrumph. So here it is, for your personal delectation and for Mister Aitch's. Happy Trails to Our Bob Hicks.

Crritic! Samuel Beckett used this term as an epithet, complete with its famously emphatic spelling, by putting it in the mouth of his rag-tag character Estragon from Waiting for Godot. Estragon spits out the word trillingly, with relish and malice aforethought, using it to trounce his fellow-waiter Vladimir in a name-calling contest.

Evidently Beckett did not think fondly of critics, and Western literature (dramatic and otherwise) is rife with writers at odds with professional opiners. Yet time has proven that a critic need not be merely a pontificator. She or he can illuminate works of art for us in ways that open them up, reveal them. The gifted critic can provide us with a point of entry into a new work, or give us a fresh vantage on a familiar one.

Such a one is Bob Hicks.

Bob, who is The Oregonian’s senior critic, retires on December 7 after decades of service to the publication as an arts editor and writer. For nearly half of those years, he was the newspaper’s full-time theater critic; he also edited the Friday entertainment supplement and the Sunday arts section. When Bob steps down, therefore, the performing arts community loses more than a discerning critic. It loses a champion.

For many of us, the tireless Mr. Hicks epitomizes excellence in arts journalism. Over the years he has become a friend and an ally to our community, but that familiarity never blunted his criticism one iota. Quite the contrary—it honed it. Bob’s sharpest critiques were always leveled at those who settled for mediocrity. Whether he wrote about revivals or world premieres, for him the greater failure was not falling short of a presumed status quo, but rather failing to strive for distinction.

In this way, through an aesthetic that developed gradually over the years, Bob has exhorted us to surpass our immediate artistic goals and to embrace a vision larger than ourselves. Bob had nothing less in his sights than a vision of what the arts could be in a town where we continually raised the bar for one another. He has given our audiences context when it was helpful, and lent perspective when it was most needed. Repeatedly he has challenged artists to surpass their own high watermarks, and he has encouraged Portlanders to support this as a civic endeavor. He has expressed his disappointment when we let him down, and he has eloquently offered his admiration whenever we succeeded. No wonder we miss him already.

Rest assured, however, that Bob won’t be going away altogether; his interests are too wide-ranging for him to remain totally absent. Recent cultural investigations have covered an increasingly broad spectrum, including visual arts, opera, classical music, movies, food, books, dance, performance art and even arts politics. Did you know that he's been nominated for the Pulitzer Prize in criticism – twice? Hence, with any luck, he’ll continue to be a welcome sight on the Portland theater scene.