Extraordinary theater experience this weekend. I caught a kind of double feature at the Lilliputian Shoe Box Theatre over near Ladd’s Addition. First in the bill was a truly transcendent production of Carlos Murillo’s mobius strip of a play, Mimesophobia, or Before and After. Significantly rewritten since its first Portland appearance in JAW 2004, the script is a dizzying combination of suspense story, Po-Mo Gordian knot and (apparently) (and deceptively) free-falling deconstruction of narrative style. If that sounds heady, it is. It’s also endlessly compelling, funny and scary, often all at the same time.

As directed by Kristan Seemel, you enter the tiny house to find you seem to be in a gallery – a passageway lined with film house seats on either side, and audio speakers posted in front of every other seat. Then you notice odd bits of Chinoiserie here and there – a kitschy sconce, a suggestion of red lacquer. Mostly strikingly, a proscenium bisects the space at a crazy angle.

The settings gels for you with the opening lines of the play. Out of the darkness, a woman (Paige Jones) welcomes you. Though she’s standing in a bright spot, you don’t locate her right away because her words are disembodied – she’s miked, and seems to be inside the nearest speaker. This queasy sense of dislocation will turn out to underscore much of the play’s meaning, but for now, she’s informing you that you are in Graumann’s Chinese. Aha. You’re about to see the premiere of a new film, whose artful yet commercial qualities are about to make its screenwriters the latest darlings of Hollywood’s glitterati.

From there the play will weave a sinuous path through several interdependent stories. One of them has a particular schadenfreudian frisson for me, since it makes gleeful fun of writer’s retreat I used to curate for A.S.K. Theater Projects. But Murillo is up to much more than parody. The play is a rare invitation to revel in the mystery of language, the power of storytelling, and the sheer ingenuity with which we attempt to make sense of our lives.

Not to mention across-the-board superb performances. That’s the awe-inspiring Brittany Burch in the rehearsal photo (by Yolanda Suarez); Brittany plays the feverishly brilliant and spooky Shawn, who unwittingly unites the play’s multiple fractured narratives. The play closes next weekend already (Aug. 23); don’t you dare miss it. This is likely one of the best theater events to happen in Portland this year. 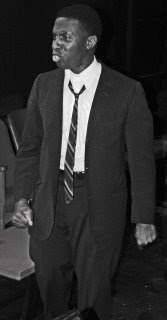 Following Mimesophobia, it’s well worth your while to stick around to see the rarely performed Amiri Baraka masterpiece, the short play Dutchman. In addition to excellent direction (by Megan Ward) and noteworthy performances by Nasir Najieb and Julie Jeske (that's Nasir at right, in the Christine Siltanen photo), opening night got a great assist from the weather. On an unusually humid night for Portland, the tiny Shoe Box did indeed feel as sticky as a Manhattan subway in August. So do yourself a favor; when the weather breaks here next week, hie yourself over to these shows and rediscover that live performance is all about.
Posted by Mead at 8/17/2008 11:09:00 AM

We caught Mimesophobia on Saturday (the weather and mood of which were somehow appropriately hot, humid, and lulling, like a surreal, still afternoon), and I'd like to give it another recommendation: it was really enjoyable to see something completely different from the usual theatre fare, excellently directed and performed, smart as hell, and brave enough to leave the audience room to make connections. It's one of those shows that you leave quietly because the pieces are tumbling and turning in your head like pieces of opal falling in glycerine. Good work to Carlos, Kristan, Sand & Glass, and the cast.