Friday night Bucky opened – well, its real and more descriptive title is R. Buckminster Fuller: The History (and Mystery) of the Universe. And though I saw the show in rehearsal and in previews (and was captivated by it), I had to sit out the actual opening because the evening was totally sold out.

And you know that can’t be bad. 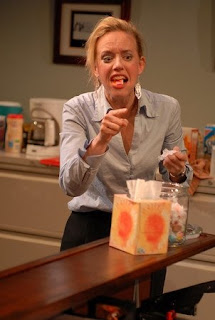 So I was cross-town in another quadrant of Oz, at Coho Productions, getting to see the West Coast premiere of The Receptionist, by comely Canadian Adam Bock. It was a gripping experience in many ways. Full of signature Bockage, the dialogue is a hyperreal crazy quilt of sentence fragments, scavenged language and slips of speech that render the action so immediate you find yourself wondering if the actors are improvising. This linguistic legerdemain lends itself so well to comedy that you forget the clever Mr. Bock is probably setting you up. Sure enough and soon enough, a sinister element creeps in – so casually you hardly notice it at first. And that’s very much to the playwright’s point.

As directed by Rose Riordan (who also directed Adam’s The Thugs for PCS), this is a thrilling production, rendered all the creepier by the way the comedy inveigles you into laughing at something that isn’t ultimately funny at all. Of course it didn’t hurt this production that Rose is one of the best directors in Portland, or that among her talents is razor-sharp casting sensibility. With a cast including Sharonlee McLean, Laura Faye Smith (that's her character in the photograh,desperately trying taffy therapy) Chris Murray and Gary Norman, she got to work with some of Portland’s most outstanding actors. Go see this show.

Saturday evening I stayed home to baby-sit Mac, and watched The History Boys on HBO -- a film offering proof positive that not every stage success should be churned into a screenplay.

Oh, but then today. Saw Third Rail’s latest: Terry Johnson’s excoriating comedy Dead Funny. It was a wild afternoon, with most of PCS’s Guys and Dolls cast taking advantage of a free afternoon to indulge in the busman’s holiday of seeing someone else’s matinee. So it was a great audience from the very top. As Hollyanna McCollum put it in PDXmagazine, “Dead Funny isn’t just a title. It’s a promise.” Personally I was puzzled, through the first act, anyway, at why people were even laughing. Sure there were jokes galore, but much of the humor was pure botulism – watching not one but two marriages fall apart in front of you meant you laughed through your teeth at how painful it all was.

But in Act 2 things get down to their depths. Maureen Porter’s character Ellie, so indomitable in the first half, eventually lets her vulnerability come to fore. And the surprise character of the story, who seems like a mere comic foil at first, turns out to be the most achingly, endearingly human of them all. This is John Steinkamp’s portrayal of Brian, a bachelor poofster so benighted he assumes no one knows he’s gay. He alone, in the end, sees that losing your illusions can be the best thing that ever happens to you.

It was inspiring, too, to see Mr. Steinkamp in a role that really allows him to use his considerable talents. Let’s hope we start seeing him more often.

Not a bad tally, eh? Three terrific plays (including Bucky) and awesome performances throughout – not something I’m able to say every weekend. Portlandia, you have a wealth of outstanding theater to see right now. Take advantage while you can.
Posted by Mead at 10/19/2008 11:33:00 PM

I cannot wait to see The Receptionist - and the script was definitely in fantastic hands with Rose!

Thanks for coming to see Eurydice--I'm glad you enjoyed it. It's no secret that I had a less than fulfilling experience working on that one, but I am quite proud of my compatriots and I am still in love with that script. One day, when I run the zoo...

Conversely, I am much envious of seeing all of these other wonderful things. Oh to bend time.