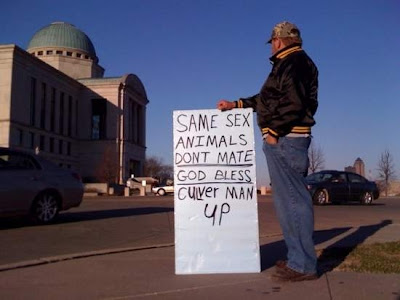 Many of you have probably seen the photo at left already, of the benighted fellow protesting the recent decisions of the Iowa legislature. Though it's easy to smirk at the guy, this actually saddened me. Here is this man, making so bold as to publicly misinform others and to display his own ignorance, unaware of something that I believe most people know to be a basic fact.

His hand-lettered placard reminded me of my freshman year in high school. The man who taught my Intro to Psychology course saw fit several times to refer snidely to "the homos" in class. I got my revenge at the end of the year by turning in a term paper about the preponderance of "homosexual" behavior throughout the animal kingdom, including primates.

Though I don't have Mr. R to harrow any more, I was still cheered by a website Cousin Tabitha linked me to this evening, called Sociological Images. This is an excerpt for a post of last year: 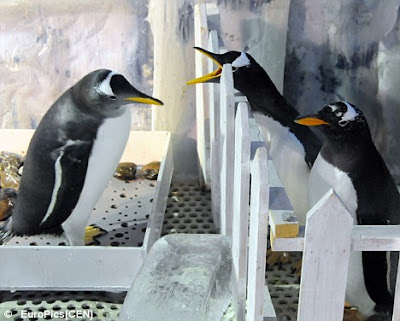 A same-sex penguin couple, on the right ... were segregated from the rest of the penguins because they kept stealing eggs. Sneakily, they would replace the egg with a rock and take the real egg for themselves. The zoo keepers eventually decided to give them the eggs of another penguin pair who had a poor record of parenting and, the story says, they are among the best parents at the zoo.

Nice Posting & thanks to your cousin.
I get tired of the argument that homosexuality doesn't occur in nature.

Great post - and though I understand why the "this occurs in nature" argument is a good way "in" politically - and I certainly have made the point countless times - my biggest point these bigots is: natural or not, chosen or "born with", whatever the case...stay the fuck out of my personal life! It doesn't hurt you!

Have you read Joan Roughgarden's Evolution's Rainbow? In the first part of the book, she goes through all the species that exhibit homosexual behavior, but it's the second part that's more interesting still. She describes how Darwin's "sexual selection" is ridiculous and explains how "social selection"--choosing a mate based on SOCIAL fitness--makes more sense. She describes the world as it is and gives us all a place in the natural order. It's BRILLIANT!