No doubt you’ve heard about Britain’s National Theatre’s latest gambit – showing high-definition, "live-captured" screenings of selected shows? It got off to a great start with the much-lauded production of Phèdre, starring none other than Helen Mirren, and on the strength of that success, now has a whole season of filmed productions ready to tour the galaxy. 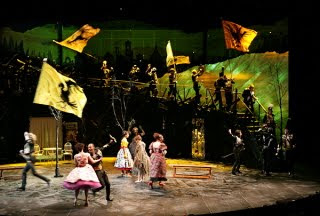 When I first heard about this, I was thrilled. Here was an opportunity to see outstanding international theater without first spending eight cramped hours in a fuselage with swine flu in continuous circulation. And I rushed to the laptop to google NT LIVE. Who would be stepping up to the bat? Northwest Film Center? The Art Museum? PCS? A university, peut-etre?

Nope. Nary a taker, and actually, as it turned out, with good reason. Showings require special, high-end gear that’s costly. So Portlanders were apparently out of luck.

Until now. Thanks to the forward-thinking folks at Third Rail Rep and some of their extremely generous (and anonymous) donors, the British are coming to Portland, Oregon. First up: All’s Well That’s Ends Well, a celebrated production directed by Marianne Eliot, on October 24.

Two more productions will air here next year, including an adaptation by the fab Mark Ravenhill and a premiere by Alan Bennett. And get this: tickets are 20 bucks. In London nowadays, that’s what you’ll pay for a pint and a really sad little shepherd’s pie. So thank you, Third Rail, for bringing London to us. Consider me first in line for tickets.
Posted by Mead at 10/14/2009 10:41:00 PM

Pretty cool. Back in the 90s, when virtual reality was just being talked about, I kept telling people that, when the technology made it possible, that theatrical live performances could greatly expand theatre's reach, and they all looked at me like I'd been sniffing glue. This isn't quite that, but it's a move in the right direction. And it beats a 14-hour plane flight.

This is fantastic. I will see you in line! :)

well i took the fucking plane flight kids. twice. second time with my ankle propped up in ice. i can tell you all about it if you'll provide me several drinks.

i had tickets to all's well before i stepped off the curb at king william st. and broke my ankle.

my mother went in my stead. she was dying to see anything at the olivier. all's well and fiona shaw in mother courage were our plans.
orchestra tix in my back pocket and my foot up on a pillow, bruised the color of dead bugs.

did catch troilus + c and as you like it at the globe. both were gorgeous. a few stories, there.
but alas, that's all i got before fate took me down.

come by and catch some ranting and raving if you're free....

It's not 20lbs for a lager and Shepard pie, but it might be with the exchange rate b/c the dollar is crap.
I am so happy 3rd Rail is doing this! See you there Mr. Mead. You know I'm such an Anglophile. x