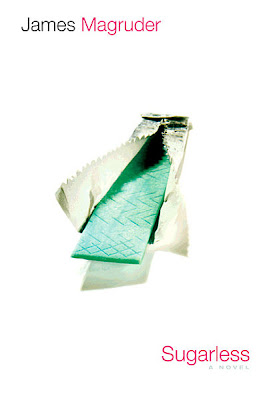 Entre nous, even whilst feverishly preparing for Wordstock, I have managed to sneak in a novel by a writer not appearing in this year’s festival. (Hopefully you’ll meet him at future fests.) You may know the divine Mr. M already from his theater assays: several Marivaux translations to his credit, for instance, plus the book for the Broadway musical version of The Triumph of Love, to name just a few things. So naturally when I learned that University of Wisconsin Press was publishing his first novel, I was all over it.

And my fanaticism was rewarded. Sugarless is a sparkling, beguiling sucker punch. It starts out as an edgy, nervously funny high school romp. Then the author gradually lures you into more dangerous waters. And even as Rick (the story’s young protagonist) achieves his pyrrhic victory, the story becomes unexpectedly poignant.

Serendipitously, Sugarless comes out a time when Fox’s musical juggernaut Glee is attracting huge audiences. But this book – which mines a different high school refuge, the speech department and its myriad contests – focuses less on the reactions of the rest of the student body (who are well nigh irrelevant in this miniature terrarium) and more on the internecine rivalries between Rick and his competitors.

Obviously this is a great book for anyone who endured the rigors of less than mainstream glory during high school: glee club, chess club, the drama department, et al. But anyone who came of age sexually during this period – which is to say, I think…all of us? – will respond to Rick’s misadventures with a sympathy that’s sometimes aggrieved, more often amused, and most often with wry commiseration.