Strange but true: there are some narratives that improve upon their transformed into wholesome musicals. The doleful story of the Van Trapp Family Singers, for one, in which a plucky brood sings its way past the Nazis. (Just don’t ask what happened after that.)

Broadway’s been making the most of this recently, as the Keller’s “Broadway Across America” season demonstrates; its previous offering was Xanadu, lovingly cherished by some as one of the worst musicals ever created for film. And now Legally Blonde the Musical, based on a movie that a lot of people genuinely enjoyed, which in turn was based on a book (who knew?) by Amanda Brown that was also popular. Yet its reaches its apotheosis in the musical version. How come?

There’s something about people breaking into song when their hearts are full that is -- well, if not “realistic,” then true to our experience. Ever walk down a city street when you’re crazy for love? It feels like your happiness radiates from you like a supernova, so bright you feel sure everyone walking by you can you’re love’s fool. You’d sing, too, if you didn’t think they’d drag you into the drunk tank for it.

Legally Blonde communicates some of this -- what Joni Mitchell called “the dizzy, dancing way you feel.” Sure, it’s fizzy, but the first scene promises to deliver on its promise that all will work out, and it does. We all see from the very first scene that the megablonde Elle Woods (named for the magazine, but of course) is better than the stereotypes she accepts for herself. And we see she’s too good for the erstwhile boyfriend she chases to Harvard Law School. We know what’s going to happen, but now how -- that’s the fun of the show.

Amusingly and knowingly, the musical trades on multiple stereotypes that its characters goes on to transcend: a silly gay boy, a graceless lesbian, a musclebound delivery dude … even a waspy ice princess is redeemed by the end, with only the truly heartless left out of the family circle. 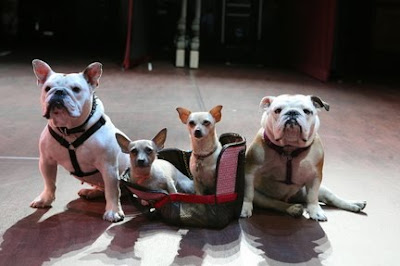 At left are a few of the show’s smaller stars -- all of them rescue dogs, by the way, which seems consonant with the show’s redemptive theme. It all adds up to the surprising conclusion-- surprising to me, anyway -- that this is one Broadway musical that’s actually worth your while (you’ve got through Sunday to see it). Admittedly, it won’t make you long for law school, but you will feel that you don’t have to chased out of Austria to merit the love of your peeps.
Posted by Mead at 2/18/2010 04:18:00 PM

I saw a televised showing of the Broadway show last year & I was shocked at how fun & entertaining it was. The show had several above average musical numbers & the show was very brisquely staged with real verve & talent... I would never have chosen to see this on Broadway. It was nice to be surprised. I saw the musical of DIRTY ROTTEN SCOUNDRELS on Broadway by default (TKTS) & I was charmed by this show with it's Bacaharach style score & slightly over the top, but fun acting by a great cast. You never know where a good time might be lurking.

I always enjoy your writing & your point of view.

Thank you, Stephen. Your mention of music (a tad important to this genre, after all) reminds me I should have mentioned the terrific score by Laurence O'Keefe, he of Bat Boy: The Musical fame -- we're going to be seeing a lot more from this gifted young composer.