Once more into the screech 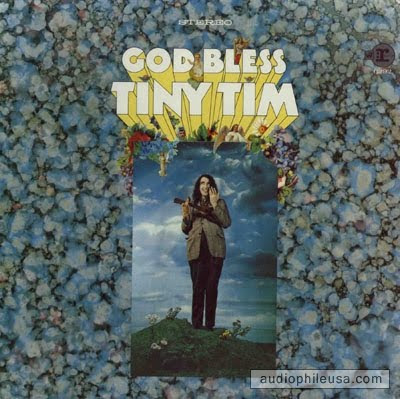 A little post-TBA fallout for you.

Remember Taylor Mac’s larger-than-life cabaret, subtitled The Ziggy Stardust Meets Tiny Tim Songbook? Taylor gave us a wild sing-a-long version of a Tiny Tim tune that can only be filed under: OB. SCURE. “The Other Side,” it was called, and I was thunderstruck when he started in on it, because I kid you not, I had been telling James all about that very song not a week before.

Part of the fun of Tiny Tim back in those halcyon days (talking the 60s here, and I was very young, okay?) was that you were never quite sure whether Mr. Tim was for real or whether you were totally being had. This was before Andy Kaufman, mind you; it was pre-DEVO and all kinds of other, later stunts designed to make sure your laughter was nervous.

Everything on the God Bless Tiny Tim album was downright bizarre, and it ranged from retro chic (a pacifist Irving Berlin song) to novelty songs like the familiar “Tip-toe Through the Tulips”; there was even an old vaudeville gag (“The Viper”). But nothing was odder — or more prescient — than “The Other Side,” a song about melting polar icecaps and the world’s subsequent drowning “to wash away the sin.”

Don’t take my word for it. Check out this video tribute to the song, which pairs original footage with the vintage Tiny Tim recording. Pay special attention to the televangelist’s voice at the end, urging you to wade into the water and “having a swimming time” as sea swells.

Then congratulate Taylor Mac and me on our fiercely omnivorous tastes.