Taylor's lament: “everybody wants to be God’s exclamation point”!

Two things to know about Taylor Mac: yes, he is as absolutely fabulous as you’ve heard; and no, the faint of heart should not sit within easy reach of him.

I caught Taylor’s uproarious cabaret last night, on the hottest night of the year, at Washington High School, where his latest performance event has been a conspicuous offering of this year’s Time-Based Art Festival. Entitled Comparison Is Violence or The Ziggy Stardust Meets Tiny Tim Songbook, the evening’s ostensible premise centers around how a lone critic pegged his act as a cross between these two legendary performers, and immediately other Google-dependent journalists adopted the description as Mac’s tagline.

But that’s all a feint, as it turns out. 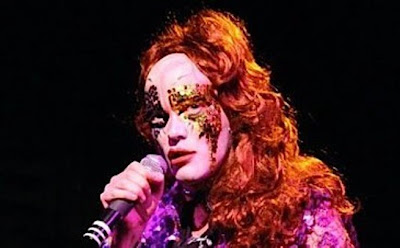 Early on Mac tells us — after asking us to sing along with the chorus of an obscure Tiny Tim song — how much he hates audience participation. At once point, after having just asked a question of the audience, he goes so far as to reassure us, saying: “Don’t worry, I’m not going to make you do anything.” Yet after singling out a few terrified spectators, he adds: “Okay, the drag queen lied.” And climbs off the stage and into the audience, where he proceeds to embroil his victims in various degrees of participation throughout the evening.

Another feint: after decrying the “niches” that Bowie and Tiny Tim were put into, the artist voices his concern that he’s always getting invited into highly specialized performance occasions such as TBA and No Boundaries. “The trouble is,” he says, “I have boundaries.”

But this too is not true. Because the entire screamingly funny evening, peppered throughout with impressive vocal gymnastics and punctuated by glitter throwing, is all about busting boundaries. Even the glam-rock drag Mac wears gradually gets shed as the cabaret continues, until by the end the bitch goddess towering over us in cothurni is revealed as a smallish bald guy (albeit a strikingly sexy one), whose voice has gone from thunderous to softly appealing.

If I’m making this sound like a jumble, much of the evening it feels that way. But yes, you’ve guessed it—this too is marvelous sleight of hand. Following this performance, director Megan Kate Ward observed: “He acts likes it’s all just a conversation, like he’s just chatting and make it up as he goes along, and then of course it turns out he knew exactly where he was taking us the whole time.”

This much IS true. At the end we’ve learned, among other things, that while comparison may be violence, sometimes a little violence is good thing.

Reportedly The Irish Times has said: “Taylor Mac seduces you, breaks your heart, patches it back up again and sews sequins along the scars.” I know now what the Times means. Once Taylor Mac sprinkles you with glitter, you’ll follow him anywhere.
Posted by Mead at 9/12/2011 05:35:00 PM