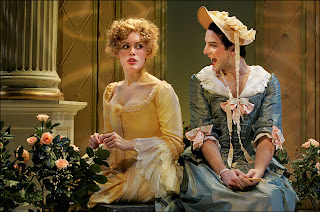 Once again this is short notice, but I’m inviting you personally to a Now Hear This reading of David Grimm’s hilarious, bawdy and -- ultimately – surprisingly affecting comedy Measure for Pleasure. As the title suggests, the humor is wryly macaronic, with Restoration-style pomp and studied refinement cheek by jowl with, um, coarser Anglo-Saxon sentiments. The Michal Daniel photo above (of Emily Swallow, left, and Euan Morton in the Public Theater production of Measure for Pleasure) gives you a clear picture of what to expect. In spirit, I mean -- we don't actually costume these readings!

Just FYI, this monthly PCS reading series exists to invite our friends and patrons to participate in our play consideration process just by being there. Your reaction to these plays is the best possible barometer of how they may work in full production. So come if you can this Saturday; you’ll help us out, you'll see some fabulous acting and you’ll laugh your powdered wig off.

Plus this time you’ll be seated in the comfortable mainstage space, with the sets for The Beard of Avon and Twelfth Night as a background. Here’s your engraved invite:

A play by David Grimm

Admission is free, but RSVPs are appreciated
Please call Megan Ward at (503) 445-3845 or e-mail meganw@pcs.org
to reserve your seat

Set in the 18th Century, this romantic comedy sex romp (involving disguises, mistaken identities, gender bending, and gay marriage) examines the nature of happiness. Can human beings be genuinely happy, or is that an unattainable goal? Measure for Pleasure is a saucy, silly, foul and filthy treat.

David Grimm is an award-winning New York-based playwright and screenwriter. His plays include The Learned Ladies of Park Avenue; Kit Marlowe (cited by the NY Post in its list of the “10 Best Plays of 2000”); and Sheridan, or Schooled in Scandal. David is the recipient of an NEA/TCG Residency Grant and has developed work at the Sundance Theatre Lab in Utah, the Sundance Writer’s Retreat at Ucross, Wyoming, New York Stage & Film and The Old Vic. David holds an MFA from NYU, a BA from Sarah Lawrence College, and has been a lecturer in Playwriting at the Yale School of Drama and Columbia University.

Email ThisBlogThis!Share to TwitterShare to FacebookShare to Pinterest
Labels: David Grimm, Now Hear This, PCS at The Armory

Awesome cast! Great reading. This was rough and tumble as it gets. I wish more people could have seen it. I haven't had this much fun at this kind of reading since "Marie Antoinette" this summer at JAW.

Thanks, KXS. The response to the play was very strong, the best we've had so far. Though there were two different people(we solicit these responses via email) who said they were so satisfied by the reading that they wouldn't be especially interested in seeing it fully produced. Is that yet another danger inherent in the reading system, now?