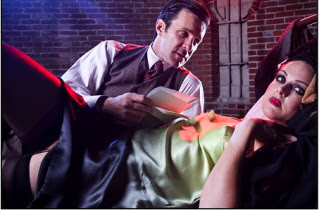 Good news from Rochester: our Storm Large scores just as superlatively there as she did here in Portland. Read all about it in Barry Johnson's piece for The Oregonian:

So what did Rochester, New York, think of the Portland Center Stage production of "Cabaret" that opened there over the weekend? Not to mention Storm Large in the role of Sally Bowles? Not to worry... the reviewer at the Rochester Democrat and Chronicle couldn't have been more enthusiastic.

"Move over Liza. "Cabaret" has been taken over by a Storm -- and she's rocking down the house at Geva Theatre," wrote Marcia Morphy. "Storm Large breathes such fire, heart and soul into the legendary Sally Bowles that her performance as the reigning diva of Berlin's famous Kit Kat Club is nothing short of hot, hot, hot."

Wade McCollum as the Emcee and the rest of Chris Coleman's production earned high marks from Morphy, too. And earlier, the paper's Stuart Low previewed the show and profiled Storm.

Of course, we did quite a bit on this "Cabaret" ourselves.

To read the article complete with its hyperlinks, go to: