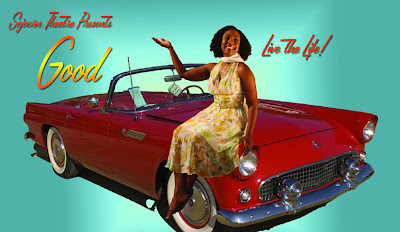 Last night The Drammy Awards reverted to a format I hadn't seen in a few years: semi-controlled chaos, a healthy mix of the outrageous and the emotional, and a delicious sense that anything could happen at any moment.

In other words, it was like Thanksgiving dinner with your entire extended family.

The O'Briens, mother and daughter, were terrific hosts -- genial and easygoing and off-the-cuff, clearing having a ball -- and though no turkey got served, Mother O'Brien did bring her home-baked brownies, which were dispensed to the award winners along with their trophies.

Of course I knew in advance which artists were getting awards, but during the actual ceremony, I felt keenly certain nominations that didn't quite make it to the award stage -- Storm Large's Sally Bowles, for example, and Rick Lewis' extraordinary musical direction for Cabaret. But it happens....a large majority of Committee members (80%) have to ratify each nomination, which sometimes means that worthy nominations just miss the cut. On the other hand, though, this system makes it almost impossible to pass any noms that are quixotic or misguided.

ANYHOW. I don't mean to complain, because PCS did every well, with 11 wins. And I was especially gladdened at the chorus of approval over Sojourn Theatre's win of Outstanding Production for its footloose adaptation of Brecht, entitled Good, which was among the most memorable and affecting plays I've see EVER.

Favorite moment of the evening: Chris Murray's Poem to the Anonymous Followspot Poster. It was en garde and touche all in one fell poop.
Posted by Mead at 6/10/2008 09:50:00 PM