Visiting Chicago is always a jolt of pure adrenaline for me. The city is loud, brassy and fearlessly intrusive in a way that’s actually refreshing, after Portland’s quaintly genteel vibe. Chicago feels quintessentially American to me, encompassing all the best and the worst that comes to mind about us. It’s got a confidence about itself that is simultaneously attractive and comical, much like the stock Yankee character of 19th-Century theater. I love it.

On this busy trip, I got to see only two shows. One was a Lookingglass production, Around the World in 80 Days, written and directed by the fabulous Laura Eason. 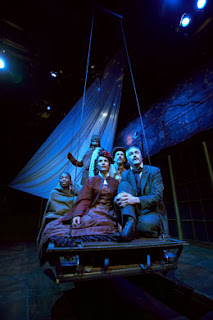 This was my first chance to see the company’s new location, in the city’s historic Water Works. This location is nothing less than theatrical in its own right; from the outside you see a fortress-like fantasy castle cut from white stone, and inside, while you wait in the Will Call line, you look over a brass railing at the oversized gears, cogs and pipes of the works themselves.

The play was a charmer. The company clearly enjoyed bringing Jules Verne’s episodic yarn to life, yoking singing, dancing and some terrific fight scenes into service. There were also great moments of aleatory stagecraft, including a mechanical elephant that the adventurers ride out of India, and a “sledge” (picture at left) that glides over the snow-covered American prairie. 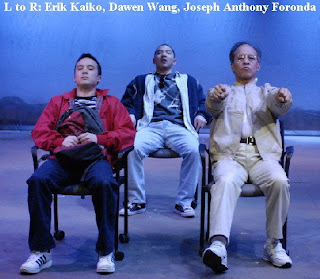 Also during this trip I got to see a Silk Road Theatre Project production for the first time, and luckily Julia Cho’s wonderful play Durango was playing. Directed by Carlos Murillo (who will be coming to JAW this July for our anniversary project, more about that soon), this was a sweetly sorrowful play about a Korean father with a past and his two American sons who know little of the way history repeats itself in families.

Silk Road produced Durango in the gorgeous Chicago Temple Building downtown, which has an intimate yet dazzling lobby. Covering from floor to ceiling with elaborate carvings, to stand still in the lobby is to feel you’re set in a Byzantine nave, like a plaster saint.

So both my theater experiences happened within architectural wonders, fittingly enough for a Chicago sojourn.
Posted by Mead at 6/01/2008 04:58:00 PM