Gay Is the New Black

Every Sunday, as I’m hanging out with the New York Times – and after I’ve perused the magazines, Arts & Leisure and the Book Review, in that order – I turn to the gloriously unnecessary Style section. Specifically, I turn to the back, where they put the engagement announcements.

Yes, I admit it! I’m counting how many same-sex couples choose to announce their betrothals or their nuptials in this conspicuous way. The Times, to its credit, start posting “gay marriages” soon after Massachusetts legalized such unions. So the wedding column went from irrelevant to compelling for me almost overnight.

For a while we averaged 2-3 male couples. Only rarely was there female pair, a fact that I ascribed to the male penchant for display. And O, any Sunday with neither persuasion to show for itself discouraged me.

There was a time there when I was discouraged for a month o’Sundays. Fewer and fewer same-sex weddings, and I couldn’t help but notice that the netherward number followed the hateful legislations happening in more and more states, including Oregon.

But the something happened. People are ornery, and the more they’re told they have no rights because they’re not worthy of them, the more contrary they’re going to get. And the uglier the evildoers got (by which I mean those seeking to withhold others’ rights), the more previously disinterested people found their outrage.

I’m one of those – the reluctantly outraged.

Used to be, I didn’t get it about marriage, and its supposedly awesome sanctity. Let the hets have it, I thought, with its medieval trappings and its kitschy oaths. And I listened with dubious interest here in Oregon, a few years ago, when Measure 36 was on the ballot. There was all manner of cant about how marriage had to be protected, though no one was never able to articulate how exactly it was being threatened.

Over and over again, the evildoers’ standard statement was: “I have nothing against those people personally; let them have their civil unions or whatever, but let us preserve the traditional definition of marriage.” But the very next year, those same people were in high dudgeon when the State attempted to go ahead and codify legal unions. “It’s marriage by another name!” they shrieked. And thus gave the lie to all they’d said before.

They stoutly maintained it wasn’t about prejudice and hate. But it was. And it is. They could come up with no other reason, apart from vague references to the destruction of civilization. But it all range hollow, because at the end of the day, all they wanted is to keep an entire strata of Americans – 10% PLUS of them, for pete’s sake – in a stigmatized, disadvantaged state.

How can they not see this? Or are these presumptive Christians just behind caring?

So now that Proposition 8 has passed, once again I’m appalled at the large number of human beings willing to stand up and say, Yes, I support upholding the traditions of bigotry, cruelty and unfairness. Yes, I wish to continue interfering with other people’s right to happiness, and yes, I mean to maintain the current level of hatred and intolerance.

Congratulations! Because thanks to you, I’ve come to see it’s not enough to hope that people will do the right thing. It’s like the lunch counters of Alabama all over again. when in the 60s. Black folk came back to those eatiers again and again, and got knocked down again and again, until the bigots were too ashamed to continue their oppression. 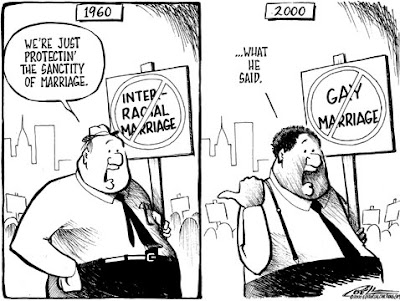 So now I’m going to get married, and challenge today’s bigots to tell me that means nothing. Thanks for radicalizing me.

Email ThisBlogThis!Share to TwitterShare to FacebookShare to Pinterest
Labels: What's so funny about peace love and understanding?

Congratulations, Mead, and best wishes. May you have many happy years and happy hears (you are verbal, after all), with the requisite happy tears.

When you say now you're going to get married. . . would you pin down "now" a little bit?

Also, will you be inviting your sainted mothers to the ceremony.

This is a website I find valuable to read on the topic of sexual prejudice:
http://www.beyondhomophobia.com/blog/

Think about this: how many--how many, Mead--hearts are you going to shatter? Eh? Into dust. Like Midori vases flung from a skyscraper.

On the other hand, congratulations!

As to the political/civil rights issue, Sisyphus may, as Camus theorized, have been a happy man. But I'm willing to bet he was a tired one too. I've despaired sometimes that things will ever change; this year, that despair has lessened, but we have a long, long ways to go before the rock rolls down the other side of the hill.

mead i adore you.

Regarding the disturbing success of Proposition 8 in California, I take some comfort in the sentiments of Martin Luther King, when he said, "We shall overcome because the arc of the moral universe is long, but it bends toward justice."

Polling data on the issue of same-sex marriage indicates that a significant generational shift in attitudes is on its way. Don't get me wrong, I'm not saying, "Be patient" -- just that I trust that sometime in the future, a great many people will look back with wonderment (and chagrin) that gay marriage was ever an item of debate in this nation.

In the same MLK speech from which that first quote was drawn, he spoke of Rip Van Winkle who, after sleeping for twenty years, awoke to an unfamiliar, post-revolutionary world. MLK said, "While he was peacefully snoring up in the mountain, a revolution was taking place that at points would change the course of history and Rip knew nothing about it. He was asleep. Yes, he slept through a revolution. And one of the great liabilities of life is that all too many people find themselves living amid a great period of social change, and yet they fail to develop the new attitudes, the new mental responses, that the new situation demands. They end up sleeping through a revolution."

And I join the others in extending my congratulations!

Wow. YJNK, thanks for the link to that excellent blog; I'm going to be following it closely, especially now to see what it has to say in the wake of P8. David, thanks for your love and support, it means a lot to me. And MTC! What an articulate and considered and passionate response -- thank you. From your lips to god's ear, eh?

As for the congratulations....they may be a tad premature, since now the James and I have to journey to Massachusetts to make good on my threat. But hey, what a great reason to see the autumn leaves next year. And to visit my Salem ancestors...spiritually speaking, anyway.....

Congratulations, Mead & James, on your engagement.

One of the great things about Massachusetts is, you can pretty much bet that at any time there'll be a bagpiper available for your ceremony.

For your premarital listening enjoyment, I hope The James and you check out This American Life show #293 which is called "A little bit of knowledge." Hear act 2 which is by Dan Savage and is called "And daddy makes three." Act 2 starts 18 minutes in and goes for 11 minutes. There are many times I've pictured this conversation on the couch between Dan & DJ, while they waited for DJ's Tylenol to kick in. The link, Dr. Mead, is:

Wheeee! I always said you were the engaging type.

oh mead! this is really beautiful news. and a really beautiful post. congratulations on getting married and on getting radicalized. how awesome that we are redefining marriage as radical. it is quite a leap, quite a radical thing to do, in so many ways. ;)

of all the things i've read or seen, keith olbermann's commentary keeps on blowing me away. i love it. prince at bamboo nation posted it at: http://bamboonation.blogspot.com/2008/11/straight-guy-tears-up-over-gay-rights.html
on 11 november. (do links work inside comments?)

and in the meantime, until we overcome, here is my love to you and james. and my salute to your salem ancestors, ancestresses...? !!

Just wait till James finds out I've committed him to marriage....without actually consulting him, much less proposing.

I don't know Mead...this may put my marraige to Suz in jeopardy. After all, you are disrupting the very fabric of society by doing such an outrageous thing. I can feel the universe tilting on its...whoa, hey, that felt good. Never mind.

So, are you going to register? Congratulations!!

col ceathair: salutations! glad to greet you across the comment page once again...

What a great post, Mead - and you KNOW how my fury has been growing...and taking that symbolic step is very important - and congrats on doing it - now maybe you should consult James. HA!

Congrats! Let us know if James says "yes". This was a great post and I sent the link onto a couple of folks I know who I hope to 'see the light'.

Congratulations to you and James! Are you thinking June, maybe?