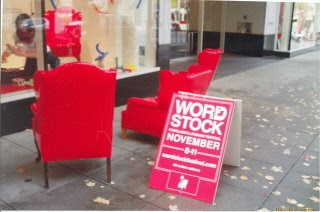 Oregon playwriting gets a boost of well-deserved recognition this Sunday when the five finalists for the 2008 Oregon Book Awards find out who gets the Angus L. Bowmer Award for Drama.

Literary Arts presents the drama award every other year, and each time it’s adjudged by a prominent literary figure from out of state, in order to avoid even the appearance of cronyism. (Isn’t that cute? I think Literary Arts is unaware of how teeny tiny the theater universe actually is….) Now that the name of the lucky winner is in the can, we can learn the judge’s erstwhile secret identity: the fab and glam Sherry Kramer, who is not only a fiercely original writer but also one of the best playwriting teachers in the nation. So it will be interesting indeed to see who Sherry selected for top honors.

The competition is fierce: Dori Appel of Ashland, for Hat Tricks; Jacklyn Maddux of Portland, for Strange Sightings in the Great Southwest; Steve Patterson of Portland, for Lost Wavelengths; Francesca Sanders of Portland, for I Become a Guitar; and George Taylor of Beaverton, for Renaissance.

Confession: I’m partisan here. Francesca is an alumna of PlayGroup, the playwriting group that I host at PCS; and Steve is a current PlayGroup member. The play for which he’s nominated got a workshop in JAW 2006. Good thing the choice of ultimate winner is not up to me.

BUT! Here's what is up to me. Prior to the announcement Sunday evening, all five playwrights will be appear at Wordstock, speaking on a panel moderated by moi-meme. I’ll ask each writer to read a brief excerpt from his/her nominated work, then I’ll ask some questions, then you’ll ask some questions.

Wordstock, by the way, is Portland’s “annual festival of the book.” It's a big deal, a real celebration of writing of all kinds, from poetry to graphic novels. Click here to see its whimsical (and oddly touching) welcome video with a great bonus: images of gorgeous autumnal Portland.
Posted by Mead at 11/05/2008 11:04:00 PM

I love it when you call us cute. That almost makes up for stealing my photo off our blog (aren't my photoshop skills AWESOME??) and saying Literary Arts doesn't know how much you playwrights all know each other, across this great nation of ours. Isn't that true in any artistic medium?

Except juggling. I think jugglers tend not to associate with their kind. Ever get hit in the head with a plate? It hurts!

Several people have hastened to assure that it's the same in any genre of writing -- poetry, graphic novels, you name it, everybody knows everybody. And man is that ever true in playwriting...

And Susan, thank you for the loan of your awesome photo panel. I'm proud to have it gracing my blog, even if I did steal it myself. Can't wait till Sunday!!