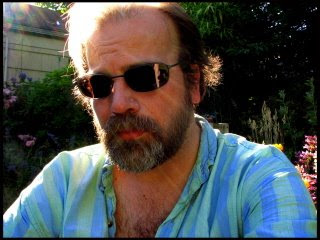 Melpomene and Thalia have spoken. And the winner is....Steve Patterson! That’s Steve in the photo, looking like a cross between Hunter S. Thompson and James Bond (the classic one), incognito except for my bruiting his success about. After his articulate and poised appearance at the Wordstock Festival of Books on Sunday, Steve went on that evening to snag the coveted Angus L. Bowmer Award for Drama with my favorite play of his, Lost Wavelengths.

In his acceptance speech, he graciously thanked his PlayGroup colleagues for their support and their counsel. But hey, we’re just glad to say we know the guy.

Actually, to qualify my first reference: M & T had nothing to do with this. The Bowmer Award is the playwriting part of the Oregon Book Awards, and is offered biannually by the fabulous people at Literary Arts. The way this works is that an out-of-state playwright of note serves as the judge, so as to avoid any appearance of cronyism.

This year’s judge was an outstanding writer and also one of the nation’s best teachers (i.e., guide, guru, fellow traveler) of playwriting. No, not her. The other one: Sherry Kramer.

Author of When Something Wonderful Ends and David’s Redhaired Death, among many other plays, this daring and groundbreaking artist certainly had a plethora of innovative work to select from the many Oregon authors who submitted this year. But she gamely got it down to five nominees and ultimately selected Mr. Patterson for the brass ring.

Lost Wavelengths, a play about a Jandek-like songwriter and the outsider music specialist who is searching for him, is a haunting, sometimes eerie play that lurches madly from the laugh-out-loud funny to the achingly painful. It ought to be produced all over the U.S., and I hope the Bowmer Award will garner it the attention it deserves. It was first read here in town at Portland Theatre Works, and subsequently workshopped in JAW 2006, so it’s ready for prime time. Let me know if you’re intrigued, and I’ll put you in touch with Steve.
Posted by Mead at 11/10/2008 09:04:00 PM

steve, if you see this, i send a big whopping salute.
congratulations!

mead, you must be busting proud. and you should be.

what a wonderful piece. and a pleasure to work on.
a toast to just-plain-oddness and singularity in art!