Bad Blogger, badbadblogger, badbadbrain, as The Ramones used to sing. I’ve been neglecting all my blogglings, and I’m probably about to keep doing that, because my sainted mother and her equally sainted sister are about to arrive. For a week. So forgive me my neglect. It is benign.

As for my excuse prior to my guests’ advent…let’s just say that against all expectations, (given this economy), SuperScript is actually attracting clients! I know, who knew!

So how about I just quickly list a few blogworthy happenings before I return to my deadline-driven projects? Let’s see… 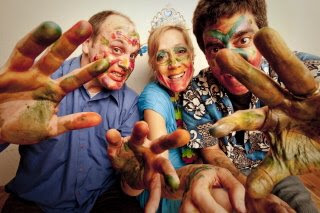 Friday the 8th, Fabuloso opened at Third Rail Rep – a fabulous night indeed, with an all-celeb audience that included Sharonlee McClean, Ross McKeen (was Robin there too, sitting in the money seats?), Rose Riordan, Marty Hughley, Craig Wright, Ebbe Roe Smith, Barry Johnson, Michael Weaver and many more. But what of the play, you ax? The title says it all. A great night of wild theater.

That same evening, Tracy Letts’ new adaptation of The Three Sisters opened over at Artists Rep; CoHo Productions opened The Uneasy Chair, directed by the ultra-urbane Shelly Lipkin; Into the Woods opened at Lakewood, featuring the always awesome Isaac Lamb; and over at Miracle Theatre, an early Luis Valdez play, The Shrunken Head of Pancho Villa, debuted as well! Add those to the ambitious and audacious plays already running, including Gary Winter’s Cooler at defunkt and Freakshow (an early Carson Kreitzer play) at Theatre Vertigo, and you got yourself an embarrassment of riches.

The following afternoon, I got to preside over a Playwrights’ Roundtable that included the aforementioned Craig Wright and Ebbe Roe Smith as well as the author of Fabuloso, John Kolvenbach. Fortunately for me, Barry Johnson has covered the occasion so well that I don’t have to (c/o the link above), so let’s jump to this week, which was partly devoted to Sojourn.

How’s this for differnt, as Tom Spanbauer would say: Portland State University hosted a conference this week entitled Understanding Sustainability: Perspectives from the Humanities. Which hired Sojourn to create an event called “Re-Casting Expertise: A Game of Public Inquiry.” In essence, we asked two experts to start off four different conversations, each prompted by a question related to the Conference. E.g.: “What do we want to sustain and why?” As a facilitator, my job was to encourage people who wanted to get in on the conversation to replace one of the experts and continue talking. Listeners could also disrupt the conversation by tossing in a question card or an “opposing view” card.

The big question mark for us as facilitators was: will people play along, or will they sit there like docile parochial school students? No problems! Conferencees were engaged and razor sharp and dauntless about leaping into the fray. The event turned out to be a rollicking time, as was working the incredibly giving Sojourners.

Thank you for drawing our attention to Live Nude Fear, Steve. I've been curious about this show and what it is, so now I'll definitely go on your recommendation.

We're now at a point in Stumptown where only the most maniacally obsessed of theatergoers can make it to everything that's GOOD, let alone everything's that's produced. So a recommendation really helps.