All right already. Summer hasn't been all ink, angst and entropy. The sounds of the season have been redolent of a certain atavistic abandon -- for me, anyway. Here's a sampling.

First, I'm grateful to the far-ranging vigilance of El Splatterson for turning me on to the spellbinding songs of The Handsome Family, a husband and wife team. As iTunes describes their music, it "teem[s] with an eerie old-time country & western sense of foreboding" -- that covers it pretty well for me. Their most recent album, Honey Moon, is a little cheerful for my taste; I prefer the spooky effulgence of the older albums, especially Twilight.

Do check out the website, via the above link, too; it's the most satisfying band blog I've seen since The Decemberist's (which band has a fabulicious new album out, by the way, The Hazards of Love).

Moroever. My obsession with Animal Collective has now led me to its earliest and perhaps most recklessly playful work. Spirit They're Gone, Spirit They've Vanished has a fauvist, post-psychedelic folk thing going on that reminds me of my favorite band from the olden days, the peerless Incredible String Band. 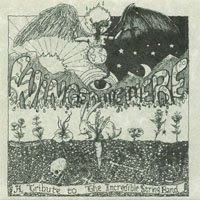 Speaking of which. Cousin Tabitha gave me an extraordinary ISB tribute album a while back that has become this summer's soundtrack for me: Winged We Were, it's called, and it's a mind-blowing collection of radical reinterpretations of song that most people have never heard in the first place. One of them, Three Is a Green Crown, is so hypnotic that Tabita (NHRN) found she couldn't listen to it and keep driving; she actually had to pull over to the side of the road and hear the song out. You can listen to the original here, then hear an excerpt of its transfiguration here.

Only you could have found a Handsome Family video...which is just as lovely but vaguely disturbing as their music. I agree that I like their older stuff a little better than "Honey Moon," though the album has a couple pretty good songs on it. But my taste goes more to their darker like "Tin Foil," "Cathedrals," or "24 Hour Store," which may well be the best song I've heard all year. It has invisible ghosts, automatic store doors opening and closing by themselves, and a solo played on a saw. How can you beat that?

Well, you can go hear them in person. Deb and I went to their show at the Doug Fir this past Tuesday, and they were just splendid. Not only their music is terrific, and they were backed by a very tasty, spare drummer and a fine guitarist wringing country quack out of a Stratocaster. And they're charming as hell onstage with their patter.

Rennie: Your mother drinks a lot.
Brett: No, she doesn't.
Rennie: Yes, she does.
Brett: She takes a lot of pills.
Rennie: Oh yeah.
Brett: My mother decorates the tree each year with pharmaceutical bottles.

They also played "Arlene," which has to be one of the most disturbing songs ever written. And a tune about insects (I missed the title) that is sheer brilliance. Seriously. Especially when you figure out, at the end, what kind of insects they're talking about.

I had a pleasant chat with Rennie before the show, and she's remarkably, uh...sane and down to earth. Good people.

Here's to the outsiders, and the little bit of outsider in all of us.

I'm adding "Ink, Angst and Entropy" to my potential band name list. Thank you for sharing the Handsome Family, which I have enjoyed, though not recommended if one is in a gloomy--as Splatterovic points out, they do have a dark side. I'm sorry to have missed the live performance.

My attention was recently directed to a band from the Bay Area called "Or, the Whale," which some writer had compared to our mutual faves, the Incredible String Band. I don't quite hear it that way, though the lead voice on the tune "Never Coming Out" seems very familiar. Whether comparable to ISB or not, I liked the tunes I heard streaming on the septet's website: www.orthewhale.com/. They will be at Mississippi Studio on August 15th and I just might be there too.

Thank you, Mead, for kindly recalling my birthday gift to you.

I know this is a change of topic, and it isn't even about Lady Chatterly's Lover, but forgive me. Only now as I was enjoying the comments above mine I noticed a bunch of micro-comments listed on the left side of your blog page. These must be tweets. I don't have Twitterese. But about the movie Women in Love, I have memory.

It just now crosses my mind that your opinion of marriage has changed (as has mine) and no longer agrees with Ursula's. I think we'd both now say marriage is an experience, or lots and lots of experiences.

Wow. The clips from Winged We Were were an ecstatic experience to listen to. Like the good kind of stoned.

Cool -- I love it when celebs visit my bloggling!

Leela77: Winged We Were is exactly the one I couldn't drive while hearing.