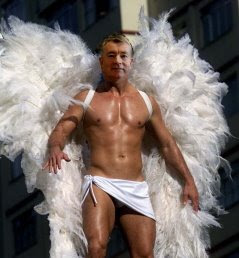 You’ve noticed it, haven’t you. The spotty posting. The distracted tone. The slack facial muscles, the drooling. Okay, not that so much. But the rest. Just admit it, it’s okay.

The photo below at right might lead you to believe I’ve been working out quite a lot. And meditating big time! Actually, true to tell, some of both has indeed been going on (and let me tell you, meditation is all it’s cracked up to be – I highly recommend it -- not the huffing and puffing), but the startling image you see before you is – but of course – the handiwork of Rose Riordan, Photostop terrorist par excellence. Some people take up crocheting, or raising ferrets, or Adam Lambert, but Rose, well…there was a time when she had quite the moonlighting thing going on with morphing my mug into all manner of amusing contexts.

This was all very affectionate, mind you, but invariably such things fall into the wrong hands sooner or later. Apparently the image resurfaced recently at a former place of employment, with a sarcastic caption appended to it: “the angel of the community.”

I’ll spare you my theories about reverse Stockholm Syndrome and just move on. Because things have been so busy lately as to make me think of my previous gig as a kind of vacation. Two major endeavors are taking up a lot of psychic energy these days, one for Willamette Writers, the other for the fabled Wordstock Festival , two organizations I’ve admired for a long time, but the all day/all night life of the theater obviated doing much with them.

WW has its mega-conference coming – August 6-9, thanks for asking – and I’m organizing the volunteers for the workshop side of the event. And I’ll be spending my birthday this year at Wordstock (October 8-11); presently I’m helping to make contact with the authors who are participating this year and inveigling them into allied activities such as panels and interviews. Activities we’re currently inventing – fun!

Neither of these are paying gigs, but they’re both open doors into communities I only glimpsed through barred windows in the past – communities that will form the predicate for an expanded sense of participation in the infinite universe of scribblers like me.

Wish me luck. I’m going in.

Oooooh....suspense. I think mebbe you should put the image and title on your next round of business cards.

Keep those hands busy, lest they lead you to...the dark side. (Or else take notes...reports from the dark side are always entertaining.)

What wonderful things to become involved in! While I had been lending coverage to both events in years past, I'd had a similar desire-to-be-involved-that-was-overwhelmed-with-the-all-consuming-nature-of-my-(former)-job sensation.

If I can volunteer my time or talents in any way, please let me know. I would love to be involved.