Get it while it's hot 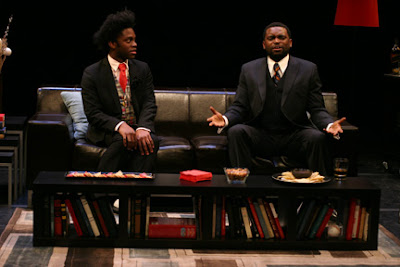 T:BA:2009 opened this week to avid pandemonium. As always, the venerable time-based art festival offers an overwhelming international slate of performances. But naturally, you care only about what I’m getting to, don’t you. So here’s my itinerary so far, if you'd like to stalk me:

Young Jean Lee’s Theater Company (which is the actual name – how’s that for honesty in architecture) performs her play The Shipment this weekend at the Gerding, so hurry up before you miss it. YJL, who is indeed young as all get-out, has been the controversial darling of progressive playwriting in Nueva York of late; now you can see what the fuss is all about.

Thanks to the Festival, we now have a chance to see Spike Lee’s filming of Passing Strange, the smash hit rock coming-of-age story of Stew, he of The Negro Problem. Look carefully during the promo below and you'll spot the radiant Eisa Davis, last seen in Portland during JAW ... 2003, I think? That's when she brought her play Bulrusher, which was later nominated for a Pulitzer.

Coming up fast: the Winningstad Theatre (Portland’s cozy answer to London’s famed Cottesloe) hosts Pan Pan Theatre’s The Crumb Trail, a pomo retelling of the Hansel and Gretel story that encompasses such interrelated ideations as identity construction and internet predators. Not for kids, I’m guessing.

Dance and its descendants is especially strong at this year’s edition of T:BA, and among many thrilling offerings. my own personal cultural guru Tim DuRoche recommends catching Miguel Gutierrez’s Death Electric Eno Protest Aerobics aka DEEP Aerobics. Reportedly this combines “vigorous bouncing” with existential absurdity, so … what’s not to like?
Posted by Mead at 9/05/2009 11:18:00 AM

I'm coming up next weekend for the festival. It would be great to meet you if you're available.

Terrific! What are you planning to see?