Confessions of a defector 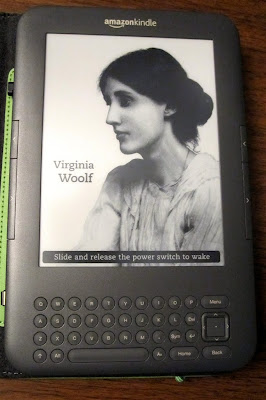 For the second year in a row, I celebrated my 75th birthday at the Wordstock Festival. If you have to work on your solar return, Wordstock’s a grand place to do it: a swirling, teeming whirl of book lovers, exhibitors, publishers, book purveyors and of course authors.
Ironic indeed, therefore, that I came home on Sunday evening, exhausted but proud, to gifts that included a brand new ….. wait for it ……………. Kindle.

Yeah, a Kindle. You know, Amazon’s “wireless reading device,” the one whose advent of recent years was widely heralded as the death knell for books and bookstores both. And I got not just any Kindle, but the new improved model: smaller, lighter, faster and greyer than its ancestors, with free wifi and 3G built into it, making it reputedly of use where in the wide world.

With all the zealotry of a convert, immediately I popped for a sleek black leather cover for the device that actually has a night light built into its spine — an ingenious, marriage-saving innovation.

First downloads: Atwood’s latest, The Year of the Flood; Lorrie Moore’s A Gate at the Stairs; and Between the Acts, Woolf’s brilliant and underrated novel that it’s time I revisited.

But the irony is not lost on me: I came straight from a festival where a constant topic of conversation concerned what happens to hardcover books in the digital age, and I gleefully launched into downloading virtual books.

The issues surrounding Kindles and their kin are legion. Most obviously: if you can already get many books steeply discounted by shopping at Amazon, and then the Kindle download costs close to half of that, who is making money anymore? If you guess it’s not the authors, you would be correct. One commentator has called digitalization of extant texts “the greatest act of piracy since Francis Drake sailed the Spanish Main.” But old or new, everyone takes a hit, from publisher to vendor.

One apparent winner in the digital death match (apart from the makers of e-book readers) is the consumer, who gets more for less. And therein lies the hope of the whole endeavor. If people can instantly gratify their impulses to get and read a certain book or newspaper or magazine, perhaps they will do it more often, and ultimately spend more money.

Sounds good. But then what happens to bookstores, which need to hold onto a vast inventory to be of any use? For that matter, what happens to festivals like Wordstock or the Brooklyn Book Festival, events that lure noteworthy authors with the promise of selling a lot of books?

Naturally enough, the answer is that they will have to gradually reinvent themselves and create new or augmented reasons for being. For instance, it’s great that I can start reading The Year of the Flood this instant. But nothing compares to trotting down to the Schnitz, as I did last month, to hear her and Ursula K. Le Guin chat about writing. And I will certainly have read Armistead Maupin’s new book Mary Ann in Autumn by the time he arrives at Powell’s (on November 12) -- only if I read on the Kindle, what will I give him to sign?

Anyway. There is a groundswell of thinking about the rights of everybody involved (see this, for example) — so much so that I’m tempted to go to law school (not really) just so I can part of hashing it all out. But as my own behavior attests, the genie is out of the bottle; one day books in print may be yet another artifact we refer to nostalgically as “sooooooo 20th century.”

The trouble with mentioning new posts on Facebook, Twitter o whateva is that people tend to comment wherever they first see the link. Which has siphoned off some of the fun of blogging for me -- the responses. Anyhow, here's a supporting link that a friend published on FB:

Mary Anne in Autumn. So does it mean she's... older? Now there's something to grieve. Wasn't she, yesterday, standing with her suitcase looking up at the Golden Gate Bridge?

Indeed she was, CC. For most of us, our entry into the story was either her or Michael Mouse. And it broke my heart when Armistead ended the series with Mary Ann decamping for a career in NYC. Apparently this return to 28 Barbary Lane (assuming it's still in the story) is partly about coming to terms with all that, and I'm hoping for redemption! I feel I pretty much came of age with all those wonderful characters....

I haven't made the Kindle plunge, but I see lots of advantages. One of my sisters, who is so well-read she makes me think I'm still at Dick and Jane level, adopted it almost immediately and now has two -- an original and the new gee-whiz edition. She started partly because her house was already lined floor to ceiling with books and opera CDs, and partly because she gets around in an electric scooter and the Kindle is a godsend -- instead of trying to pack several books in the scooter's tiny basket, she has as many as she wants on her compact reader, and can pull it out and read what she wants no matter where she is.

Writing is writing, and to a certain extent the question of book or electronic reader is simply a matter of delivery: same product, different format. Long-term, what does it mean? Who knows? One possibility: physical books become art objects, works that are not just literary but also tactile and visual pieces. A physical book becomes highly valued AS AN OBJECT, and its design becomes at least as important as its content.

I'm so used to the tactile pleasure of flipping actual pages that I just haven't been able to make the leap. But maybe, maybe, one of these days ...

You know, I always thought the feel of a real book -- the turning of the pages you mention, the heft of it, even the smell -- would be something I would miss. But while I value those aspects all the more now, it turns out that most of the time it IS the content that's king, so I don't miss the rest. Reading Atwood's latest now, I find I read so fast that my thumb just goes click-click-click, taking me through each page without a conscious awareness of pages turning.

That much said, I have bought actual books since getting the Kindle (last week), and did so because they were books I knew I'd want to underscore and annotate heavily. Now you can do this just fine on the Kindle; you can even share your notes with other readers, if you want. But I knew the synaesthetic experience of reinforcing learning with a palpable action was something I needed to keep. So there's yet another reason why actual, physical books will (we hope) never disappear entirely.

We just ordered our first Kindle from Amazon, and I'm unbelievably excited. I think I'll be a little disappointed at first when I can't immediately order every obscure book I want to use for research. But not having to lug ten books around when I'm researching a story (when and if they become available for Kindle) will be fantastic. And packing for a trip will be so much easier.

I love books. I love the feel of them, the smell of them, the very essence of them . . . I love bookcases filled with shiny spines or dusty volumes. (Growing up my parents had their set of 'the Great Books' that they could neither afford or appreciate in a prominent place in our tiny home.)

But I love the digital age. I love my dvr with my favorite movies saved off TCM. I love my laptop and my desktop and I want WiFi to be available everywhere, whether I'm haunting a coffee house or a nude beach at Sauvie Island.

I want to be able to log into the Chicago Tribune archives and research the 1920s . . . but that will never replace leafing through the newspapers themselves.

Maybe books *will* become art pieces. Maybe authors will find it even harder to make any sort of living from writing. With words as accessible as they are and so much *really good* fiction free on the internet, who knows?

It's a New World. And writing is experiencing a change as revolutionary as when the printing press was invented. Are we up for it?