Zeitgeist in the Heights

Running right now at the Keller is the antidote to all that: In the Heights, the Tony-winning upset (which snagged Best Musical of 2008, among other distinctions) that gleefully thumbs its nose at all the musical theater “rules” and gets away with it. 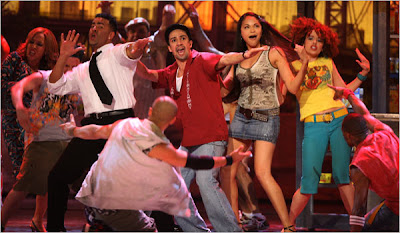 Indeed, if you’re a devotee of more typical Broadway fare, In the Heights may confuse you at first. Its Latin/rap-inflected musical idioms aside, it’s almost closer to opera than to musicals per se; it’s all but through-composed, with only a handful of spoken sections. Also, since the first rule of theater stagin in general is to control the eye of the spectator, it’s astonishing (and liberating) to find the show's staging does not always demand you stare at predetermined locations. In the dance numbers — and there are many — so much is going on in every corner of the stage, and it is so individuated (i.e.: not always patterned or synchronized), that you could watch this show several times before you saw it all. The photo at left gives you an idea. (It’s of the original Broadway cast, but I assure you the touring company now here in town is outstanding.)

And what dance it is. The dazzling spectrum of moves is largely free of the shopworn Vegas-style vocabulary that makes many musicals so dull; instead you’re treated to a frenetic, more free-form approach (or at least the illusion therefore) that looks like it’s right off the streets.

Another thing I appreciated about this show: since it’s about a neighborhood (specifically a corner in Washington Heights), it reflects all its residents, to be interracial and intergenerational. Sure there’s plenty of young love going on, but there are middle-aged and elderly residents, too, who get their time onstage. And their experience is beautifully reflected in the songs they sing: survivors favor anthems, older characters go for a lyrical style, and the youngsters sport more muscular, jangly motifs.

This truly is a musical for our time. In short: Starlight Express it ain’t.

The remarkable music and lyrics are by the man who conceived the show, Lin-Manuel Miranda. You can check out his Tony acceptance speech below, which may be the most stirring one ever delivered at the ceremony, and is here courtesy of the legendary Cousin Tabitha, who accompanied me to the Keller last night and loved it. By the way, the book is by Quiara Hudes, the playwright whose Elliot, a Soldier’s Fugue got a beautiful, haunting production at Miracle Theatre Group a few years ago.

Thanks for the review - and have you see this, amazing performance by Miranda at the White House!

Yes! It must have been about a year ago that I posted it on this blog. Thank you for reminding me, Lucia; it is a great pleasure to revisit it. Don't you love it that this video is on the White House's website?