The Age of Nefarious 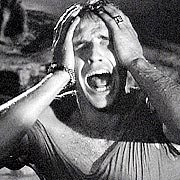 Last weekend provided a series of wild, woolly and dangerous nights out for the theatergoers of Portland, Ore. On one end of town, at Northwest Classical Theatre Company, the woman playing the lead role in Timon of Athens hurled a plate at an exiting actor and caught an audience member full in the face. While across the Willamette River in the southwest quarter – what are the odds? – at ART’s opening night of A Streetcar Named Desire, Stanley Kowalski hurled a plate into the audience that struck a Just Out reviewer in the face.

But wait there’s more. Reportedly the same night at Cirque du Soleil ’s show, as performer hanging from a chandelier fell about 15 feet and had to be carted off for repairs.

In each instance, there was an awkward, flustered pause, and then the show went on.

What fell alignment of the stars could be bringing about all this mayhem? Or perhaps – perhaps the fault is not in our stars, but in our very own…… Mike Daisey.
Posted by Mead at 4/14/2008 11:11:00 PM

Email ThisBlogThis!Share to TwitterShare to FacebookShare to Pinterest
Labels: Mike Daisey, The Stars

You're really trying to pick a fight with Mike Daisey, aren't you?

Saturday, I went to see "The Show" in support of Dr. Holman and others, and when the cast were tossing faux bricks into the audience, one bonked the lovely Deborah Lee on the head. (She's fine.) Maybe it's a conspiracy to take it out on the audience for indie producers not paying scale. Hah! Missed! (Sorry, Deb.)

To k.crow: maybe
To SP: definitely!

"There's something in the air besides the atmosphere." (quick, who said that?)

Poor Deb, I hope she's the last casualty of this evil star passing over PDX theater.

And about Mike Daisey, I will give vent to my big beef with him as soon as this freakish week calms down. All will be revealed!

There's a story on your pal, Mike, in the arts section of today's New York Times. They didn't seem terribly sympathetic to his cause. One person they interviewed about him (and I forget who it was) said "Mike Daisey should go run a theatre for awhile and then get back to us."