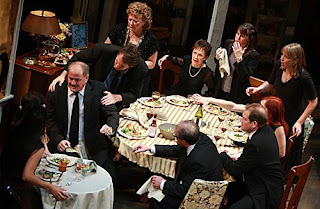 By now I’m sure you don’t need this blog to inform you that Tracy Letts has won the 2008 Pulitzer Prize for drama for his astonishing play, August: Osage County. But I've been making mixtapes instead of blogging, so here is the news post-belatedly.

Part of what makes August so astonishing is that on the surface it seems to be a throwback to a once-prevalent form of American drama – the portrait of a family in trouble, presented wholly as a piece of kitchen sink realism (and yeah, there really is a kitchen sink). Reading the play, you sense a shadow falling over the pages; the ghosts of Williams and Miller and even O’Neill bear witness to work of this nature, and remind you that at its best that work was compelling, even visceral.

Letts breaks all the rules here by returning to a dramatic form that some of us relegated to a footnote of 20th century history. A:OC is three acts long, lasts for more than three hours of playing time, and has a gargantuan cast by modern standards -- 13 characters, all of them vivid and significant to the story.

If I got a query letter from a writer listing the above aspects of his play, I could not have asked to see his script in good conscience. How could my company afford to produce it? But fortunately for American theater, Tracy Letts did not have to depend on the query system to get his play read. It was nurtured from conception to production through Steppenwolf’s outstanding New Plays Initiative,whose philosophy is espoused here:

… [A:OC’s] development process reflected our philosophy that new play development must be tailored to the individual playwright’s needs and geared toward production. At each step along the way — from the first reading to the production now running on Broadway — August gained vitality through the participation of an ensemble of artists with a long history of collaboration.

I want to acknowledge that the Pulitzer Committee awarded August this distinction in a very strong year; the other nominated finalists in this category were: David Henry Hwang’s Yellow Face, and Dying City by Chris Shinn.

Mr. Letts comes to Portland early in 2009 with a world premiere in tow for us: his adaptation of The Three Sisters, which will open at Artists Repertory Theatre as one of the linchpins of inaugural New Work Festival.
Posted by Mead at 4/21/2008 10:28:00 PM

I'm eagerly anticipating its arrival on the library shelves.

The question becomes, now that it's won the Pulitzer, how many regional theatres will make room for it in their seasons over the next several years? Mead, if A:OC had come across your desk and you knew it was by Mr. Letts and unproduced, would it get a serious look, or is the length and cast size of ANY new play that prohibitive to consider for production? And not just at PCS but any of the large regional theatres?