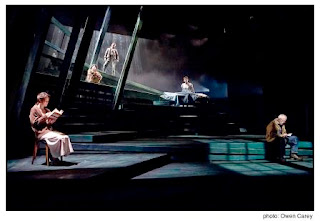 To each their own: The Stamper family rests a moment, each in their private world. Vivian Stamper (Sarah Grace Wilson, left) samples from Wallace Stevens' poetry while patriarch Henry (Tobias Andersen, right) does some reading of his own. Leland (Karl Miller, middle), awakes to visions of older brother Hank (P.J. Sosko, standing) and cousin Joe Ben (Andy Paterson, seated) on the slopes amid the timber. Sometimes a Great Notion, the world premiere adaptation of Ken Kesey’s essential Northwest novel, plays through April 27 at Portland Center Stage. Information, behind the scenes blogs, and tickets available online at www.pcs.org.


Already it’s a week since Sometimes a Great Notion opened at PCS. Why am I just now getting round to registering it here? Probably I’ve been in recovery since the opening.

Don’t get me wrong – the opening was a colossal success, tickets are flying out of the box office as fast as the staff can print them, and the rehearsal process was a joy from the meet & greet to the dress. But the project has occupied my consciousness to greater or lesser degrees ever since Aaron Posner brought his adaptation to us three years ago, across three workshops, many looooooooooooong conversations, and innumerable emails.

Since opening, the audiences have been amazing. For many, their sense of ownership with the Kesey novel is profound. At almost every Prologue (short talks we give prior to performance about the play), someone will declare that the book is the quintessential Oregon story. Which amuses me, because while Kesey does indeed celebrate Oregon – and Oregonians – he’s also critical, maintaining a wry detachment at all times. The story is a study of people divided against themselves, actually, so it seems about right that our patrons accept all of it, the scabrous with the glabrous.

With fewer than six years of Oregon residency behind me, I can’t claim to have webbed feet yet. But the wet, dankly verdant gloom of the story’s setting is certainly dear to my heart, and when I left L.A. for Portland I exulted at that thought I’d be returning to it. Oregon’s climate and topography impinge upon the action to such a degree (in both Kesey’s novel and Aaron’s adaptation) as to be an uncredited character. And we love it for that.

By the by, in case you missed it, here’s the link to Marty Hughley’s A&E preview piece about the show that ran in The Oregonian, as well as his post-opening review.


The show has also been plugged and/or reviewed in a few literary blogs as well, including Powells (scroll down a bit to find it), Julie in the Pearl, PDX Writer Daily, Describe the Ruckus, and Literary Kicks (a New York based lit blog -- check out the “can’t wait to see it when it comes to New York” reference.

Email ThisBlogThis!Share to TwitterShare to FacebookShare to Pinterest
Labels: Sometimes a Great Notion

Hey thanks for the shout out. I'm adding you to our blogroll.