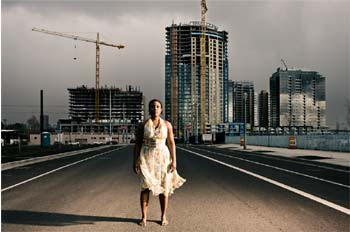 TBA:08 is getting off to a great start this year with a number of events that simultaneously critique and celebrate Portland as a unique social experiment. I got a jump on the action tonight by catching the preview performance of Sojourn Theatre’s ingenious and fun new piece, Built.

The setting for the play is in South Waterfront, Portland’s glossy new development that reclaimed a blighted marshland -- long assumed uninhabitable thanks to decades of industrial waste dumped there -- and constructed a space age village of riverfront high-rises (many facing Mt Hood) built according to rigorous Green standards.

Built interweaves performed sections with game-playing activities that capture audience statements and use them in the evening’s narrative. Some of these activities are individual; I opened a kitchen drawer, for instance, to find a grid, a box of figurines, and an instruction to place a figurine in whichever quadrant represented my experience (raised in a city, in a rural environment, a small town, etc.). Later I wound up in a group of spectators where we were asked to choose which city services we wanted closer to our residences, and to arrive at a loose consensus with the others in the group.

One of the most breathtaking performances involved a couple literally walking a tightrope (actually two parallel cables) who gradually grow into disaffection as their attempt to buy a home reveals prejudices and fears that had never come to light before. Here, as elsewhere, the inventive choreography kept your eyes engaged and left your ears free to consider a series of overlapping dialogues. I especially remember one person saying a community should develop, not be developed, and then a counterpoint argument challenging that notion as a reactionary bias.

The whole event echoed a civic dialogue that’s been brewing here for years. We’re often reminded that the popular image of Portland, which is ballyhooed these days in everything from The New York Times to Bon Appetit, is the result of meticulous planning that was begun 30 years ago. How is that discussion proceeding today? Who is safeguarding what we’ve gained, and who is making sure it continues to evolve along with its citizenry?

Built is a heady and entertaining launch into these issues, and I hope you can see it. Performances are free, but only 40 can participate at one time, so reserve your space tonight.
Posted by Mead at 9/04/2008 10:13:00 PM