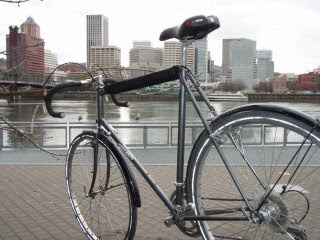 You know how in the past I’ve alluded to PlayGroup’s top secret, unassailable, never-to-be-scruted blog? Where we hang out our highest aspirations and most petty grievances out to dry, away from the jaundiced public eye?

Well, the post below (plus its photo above) is timely rrrrrrripped from that blog – with the poster’s permission, of course – one Steve Peterson. It’s too nice a thing not to share it on the intergalactic scale of my blog. [kidding] [blushing at my own cupidity] [anyway] Here it is:

I picked up the new issue of American Theatre, and I was pleased to see it contained four Portland theater references: a story on set design for Sometimes a Great Notion (with a beautiful photo by Owen Carey); a piece on ART's new resident ensemble, including pics of four Portland actors; a piece on Oregon Children’s Theatre's collaboration with a Milwaukee (WI) theater (the show--I forget the title--is going to play both there and here); and a JAW reference in the article on David Adjmi's play Stunning. Stuff on PCS, ART, and Milagro crops up now and then in American Theatre, but I was kind of thrown by so many references in one issue. Maybe some lobbying from those in the know could coax a story on Fertile Ground … It does have news peg in that the festival's kind of a unique cross between a fringe theatre festival and a music festival model (e.g., South by Southwest). Which would be tres cool. No?

The play at Oregon Children’s Theatre (OCT) is “Gossamer,” which will be performed in the Winningstad Theatre from October 18-November 9. The script was written by Newbery Award-winning author Lois Lowry -- her first play and an adaptation of her novel for adolescents. In 2006, OCT premiered an adaptation of Lowry's book “The Giver,” with a script by Eric Coble. That script has subsequently been picked up by theaters for youth across the country. Out of that experience, OCT's Artistic Director, Stan Foote, talked Lowry into taking a stab at her own adaptation. With Lowry and his counterpart at First Stage in Milwaukee, Foote has been developing the script for well over a year. In addition to readings in Portland and Milwaukee, Foote and Lowry were invited to work on the script as part of the NYU-Steinhardt New Plays for Young Audiences program this past summer. More at www.octc.org. And now, back to our regularly scheduled program.

What a great idea from Steve. I'm totally going to think about how we can best inspire them on that subject... perhaps starting with the interest they already have in Nancy Keystone's project?