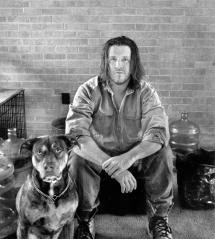 This past Friday, maverick writer David Foster Wallace hung himself. If you’ve never gotten round to reading his writing, you have wonderful experiences ahead of you. And if you have, perhaps you feel like I do – stunned, bereft (since to read his work is to feel you know some small part of him) and also angry. To think of all the works to come that will now never manifest.

For years I’ve been meaning to write to Mr. Wallace and ask him if he’d ever thought of trying his hand at playwriting. He’s written so much dialogue into his novels, and Brief Interviews with Hideous Men is all "dialogue," after a fashion. I feel he could have really run with the ball in writing for live performance.

There’s a terrific tribute to the late author, written by Laura Miller, just posted on Salon.com. I recommend reading it in full, and then reading her excellent interview with him from 1996, which contrasts poignantly with the news of his untimely end. Here's an excerpt from the tribute:

He was my favorite living writer, and I know I have plenty of company in that. His detractors accused him of being show-offy, of calling attention to his own cleverness, but they, too, were wrong. He meant, with his footnotes and his digressions, to acknowledge the agonies of self-consciousness and the "difference between the size and speed of everything that flashes through you and the tiny inadequate bit of it all you can ever let anyone know." Point taken. Still, I read about his characters, each tennis prodigy and recovering addict and transvestite hooker and yuppie and ad exec and game show contestant and closeted political aide, and thought: Hey, I know you. Maybe it was an illusion -- Wallace would have been the first to admit as much -- but it made me feel less alone, too.

Another friend directed me to this clumsy student transcription of a commencement address Wallace gave at Kenyon College in 2005. It's possibly the best of this sub-genre I've ever seen or heard. Not the wittiest, not the wisest, not the most informative, but the truest:

"Forever Overhead" from "Brief Interviews..." remains my favorite short story. i read it in college and it completely rocked my world. changed what i thought about writing, fiction, and the beauty of simple moments.

And now for something completely different, let's talk about Resurrection!
My heaven, just saw a film of the lady I live with, all dressed up and looking like a Bette Davis train wreck.
I wonder if you need a copywrite agreement to air that?
Probably not, given we in the digital age, where everything goes on for free.
How the hell are you?
I am completely into the virtual age!
I have several blog things and various pages of friends and such.
Come on by and see me.
Oh -
Apologies for crashing into a eulogy, but as someone once told me, Life is for the living.
http://lurainpennynewsletter.wordpress.com/
Hugs,
LuRain Penny
x

Quite right, LuRain, quite right.