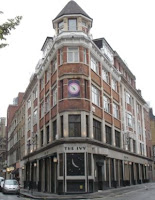 Snow days are great for catching up on the flotsam and jetsam of contemporary culture, and we spent our pre-Christmas evenings indulging in a lot of that of the film ilk. In addition to the aforementioned Mr. Magoo’s Christmas Carol, we watched I’m Not There (absorbing), Notes on a Scandal (yawn) and Iron Man (couldn’t even finish it).

Also finally got round to the Extras Christmas Special, the series conclusion to Ricky Gervais’ highly original exploration of narcissism, venality and celebrity status – and only a year after everyone else! There was a moment I especially enjoyed, when main characters Andy and Maggie are lunching at The Ivy, a posh watering hole for successful playwrights as well for film industry movers. The Ivy is widely assumed to be the setting for Pinter’s last play, Celebration, so it’s a fun in-joke when Andy drops his voice and says to Maggie, “Oh look, there’s Harold Pinter.” 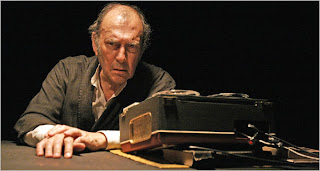 Eerie to discover, next day, that Mr. Pinter was making his last exit at the same time I was enjoying Gervais’ affectionate joke. That's the playwright to the right, acting in a production of Krapp's Last Tape -- a play by another writer who can boast a Yuletide death.

Pinter’s contribution to dramatic literature may be well nigh incalculable. It’s isn’t just the body of work, remarkable though that is; it’s also that he changed our understanding of how dialogue could work. As his friend Henry Woolf saw it,

"People for the first time in English drama spoke in non sequitors — as if they hadn't heard what had just been said to them," Woolf says. "They had to have heard, but they didn't want to respond so there were these strange pauses and silences."

Turns out Pinter wasn’t the only trailblazing performing arts luminary to give up the ghost on Christmas Day. Eartha Kitt, who made Lady Bird Johnson cry at a White House dinner by criticizing the war in Viet Nam, also left us last night. She was as outspoken as Pinter himself, but with both of them, it’s their work we’ll remember. Feast your eyes and ears:

Mead, how could you not love Notes on a Scandal?! Movies about crazy stalker lesbians are not only always entertaining but they serve as necessary cautionary tales!

Notes on a Scandal was one of those movies where when I watch it, I go why do people think this is so good? It's one of those films where our reaction to it tells us more about our culture than the film necessarily does, if that makes any sense. Iron Man - I found it openly racist or am I just a terrorist sympathizer? We watched The Dark Knight last night - it's kind of infuriating in it's simplistic justification for fascism, but Heath Ledger's performance is all that and the role is well-written. Glad to know that I'm not the only one who is a year or more behind with the film watching.

Notes on a Scandal has a weak foundation...indeed a flash still of contemporary culture...not terribly interesting - but I love it for the trashy, histrionic exercise that it is. With any other actors it would have been intolerable, but I felt everyone involved with the project elevated it to something that is quite good...if only for its precise execution. And the Philip Glass score is terrific.

I actually think it would make a great opera...might be a better medium for the material.

As for Pinter and Kitt - I'm still not wanting to think about it. Pinter changed everything about the way I look at rhythm and dialogue.

now i thought notes on a scandal was brilliant.

Well, Blanchett and Dench acted the hell out of Notes on a Scandal; it would have been unwatchable with the wrong actors. I just get impatient with movies in which smart people do idiotic things and then are stunned to find there are consequences.

But of course the riposte to this is obvious: if not for abnormal psychology, would we have any stories at all?