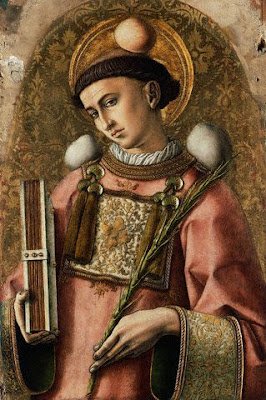 Today we celebrate the Feast of St Stephen – an odd commemoration to come so hard upon Christmas, since Stephen was stoned to death early in the first century for blasphemy, whatever that meant prior to the Inquisition. For his transgressions, the saint was killed by a mob that was egged on by St Paul before he was St Paul – prior to setting forth for Damascus and all that.

Check out the allegorical portrait on the left. Those things that looks like potato epaulets represent stones. Often, though not alas in this picture, Stephen is shown holding a miniature church. Because he is, after all, a protomartyr.

Anyway, December 26 is traditionally his day. St Stephen is the one on whose feast day Jolly Old King Wenceslas went forth. He was also beloved of the Grateful Dead, who had this to say about that:

Saint Stephen will remain, all he's lost he shall regain,
Seashore washed by the suds and foam,
Been here so long, he's got to calling it home.

Fortune comes a crawlin', calliope woman, spinnin' that curious sense of your own.
Can you answer? Yes I can. But what would be the answer to the answer man?

Though I could find nothing that explains why Stephen got saddled with the anticlimactic date of 12/26, I for one welcome the shift back to satisfying, definite narrative closure. A steady diet of holiday fare was beginning to make me glucose intolerant. Last night, for example, following a stultifying smorgasbord in which dessert lasted long than the actual dinner, we all watched White Christmas, the Bing Crosby vehicle. Some eye-popping choreography in it (including a well-observed spoof of Agnes DeMille’s dance vocabulary), but like most such confections, it ended the minute everybody got married. Doesn’t that strike you as unversimilitudinous? For many of us, our stories really got interesting after we got married. 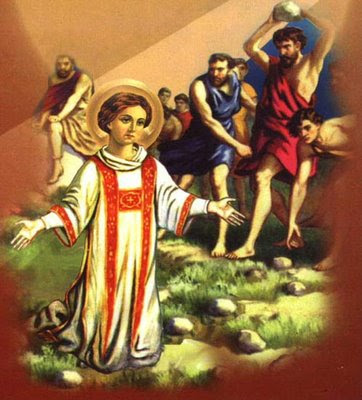 Yes, the beat goes on. Which is to say: just because you’ve not yet been stoned to death doesn’t mean that fate doesn’t await you. To wrench Elvis Costello out of context, postmartydom may be a death worse than fate. Happy New Year!
Posted by Mead at 12/26/2009 10:37:00 PM

St. Stephen's Day happens also to be my natal day, but I believe that's purely coincidental. What strikes me between the eyeballs about this post is Mr. Mead's fearless and utterly natural, in its context, use of the word "unverisimilitudinous." Not many could pull that off with such nonchalance. Congratulations, Mead!

St. Stephen, stoned to death for blasphemy. Taken out of the historical context, the mind reels. Speaking as a Steven (though, I hope to God, never a saint).

Yikes... our posts for the 26th are tantalizingly close.
Thanks for your great blog, getting to know you a bit in 2009 was a great pleasure. I know it was quite a year for you. Wishing you the best in the new decade.
I remain a fan.

Stephen, that is eerie...! Our posts are indeed similar, though yours is much more felicitous. Somehow mine ended on a sour note I didn't mean to give voice to, really. Also I didn't know about Wren Day until a colleague told me all about it -- fascinating.

Thanks, too, for your well-wishes. It has been a bracing year, but also an exciting one. Here's hoping for an effulgent future.