"We're so thankful for all we've got
And so sorry for everything we're not..."


As the only person in the great State of Orygun who has not yet weighed in on the TV show Portlandia — well. Seeing as how the IFC social satire’s been renewed for a second season, it’s high time I added to the general blogritude to say that I thought the show was.........intermittently amusing. Brilliant when it stuck to lampooning things genuinely Bridgetown, but tepid when it resorted to warmed-over SNL-style sketches. 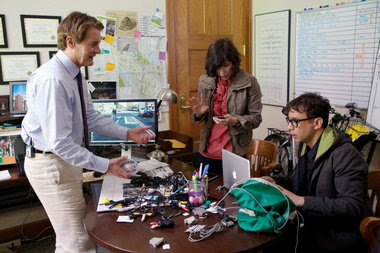 My favorite episode of Season 1 was the second or third one, where the Mayor (played by the eerily apposite Kyle MacLachlan) commissioned a pair of local roustabouts to write a theme song for the City of Roses. Their ham-fisted attempts to hack out something suitably anthematic served as an ongoing motifs for that episode, with each songwriting attempt worse than the one before, of course.

The punch line for the storyline didn’t come till the credits, when you were treated what the two songwriters actually turned in to the Mayor. And the wonderful epiphany was that it was good — dippy and DIY and beguiling at all once, the combination of which is, after all, very much a Stumptown specialty.

I wish it really were the city’s theme song. Here it is, see you what think.

I think my favorite joke all season was the one in the bookstore where a frustrated Steve Buscemi snaps "And where is there a store that sells only puzzles?" and gets the matter-of-fact reply: "There's one on Hawthorne, and another downtown on SW Broadway." Again, something so specific, you'd really need to be a Portlander to get it. (The only thing that could have made it even better is if the other bookstore worker had added: "And what about that one in Sellwood? You know, in the old Gypsy caravan?")

And, in true Portland fashion, I have to ask: but, in the video, why wasn't it raining?

Yesterday's perfect Portland moment? Aghast, I caught myself squinting at the Oregonian's front page, helicopter-eye-view of the downtown Rose Festival. I was trying to spot the building I work in.