Monday night and the dramaturg is IN. 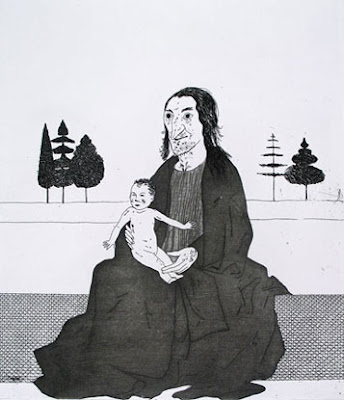 Admittedly, I love all aspects of dramaturgical service in the theater. Rehearsals. Think pieces about the shows. Contextualizing a production for audiences. Hanging out with the actors. Design conferences. You name it.

But there’s something especially pure about the research phase of a new project, when I’m simply reveling in the universe a writer has created, that for me is especially luxuriant.

In the past couple of days, I’ve looked into spaghetti westerns as one way to inform the new Milo Mowery/Rody Ortega musical, El Zorrito, which will debut at Northwest Children’s Theater this coming season. And I’ve searched for images of Boise streets, morbidly obese English teachers and Mormon underwear as we start work on Sam Hunter’s The Whale for its production next year at Denver Theater Center.

And tonight I’ve been looking into the story behind the story of a classic fairy tale, also for Northwest Children’s Theater, that James Moore is adapting. The title gives you a good sense of the playwright’s overall tone: Rapunzel — Uncut!

Here’s a tidbit from my research: “rapunzel” was an old-timey name for a leafy plant they used to cultivate in old Europe, more commonly called rampion, which we now call lamb’s lettuce. When Rapunzel’s mother was pregnant with her, she (Mom) had major cravings for the plant, which led to stealing it from the garden of a very talented and lonely witch — and you know the rest of the story.

As Karen Finley has wryly pointed out in her play The Theory of Total Blame, everything is always the mother’s fault, from Clytemnestra to Lynne Spears. So I appreciate this poem I came across by Carolyn Williams-Noren, where she gives voice to the least sympathetic character in the fairy tale in “Rapunzel’s Mother.”

I can't explain why I wanted that simple
thing so much: dark green rampion leaves, the curled
coverlets of them stacked together on the sideboard,
the rainy steam of them cooking, the hot full softness
and the bittersweet bite in my throat, mouthful
after mouthful. It was as if there was no other way to keep alive.

I forgot to mention that the top illustration is by David Hockney, The Enchantress and the Baby Rapunzel.

My Greek grandmothers ate bushels of dandelion greens. This explains a lot of things.

Smart Coloradans, bringing you in early!

Change of topic -- thanks for tweeting The Rise and Fall of Pseudonyms, as you recently did.

I'm not sure if that was supposed to get italicized or marked in quotes or neither. I think I need an editor.

For the record, C.T., it would be quotes, since it's an article....but who's counting, right??