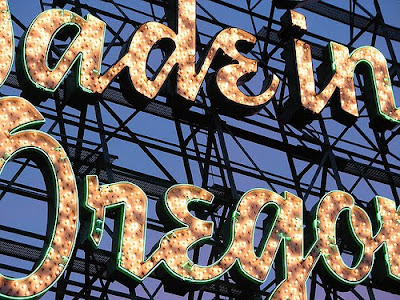 I’m way late in relaying this information — it was released nearly two weeks ago — but I’ve been reallyreally busy. Which calls for another blog post altogether, but for now...

…I want to focus on the first weekend of the festival formerly known as Just Add Water. This first leg of the festivities is called Made in Oregon, and it’s a reading series of new works by — who else? — all Oregon-based writers. This year’s a special one for me personally, because 3 of the 4 participants are former members of PlayGroup (the writers group I ran for seven years back at PCS), and these same writers are now charter members of Playwrights West — a group of playwrights committed to fully producing one work per year of a member playwright, along the lines of 13P and Workhaus Collective.

M in O boasts of a brand new play by the fab Matthew B. Zrebski with a title I find fulsome, for some reason: Forky. I haven’t read it and plan not to, so as to be totally awed by this playwright’s always spellbinding dramatic vision. For now I can only say: Expect to be startled.

Another must-see: Andrea Stolowitz’s beautiful and moving play Antartikos, fresh from its workshop at the New Harmony Project. ART presented an early version of this play for this year’s Fertile Ground Festival, directed by Gemma Whelan, which came off splendidly. Someone is going to up and actually produce this play and do very well by it. Theaters, take note!

Rounding out the Playwrights West juggernaut is Patrick Wohlmut’s play Continuum. Megan Kate Ward presented an early version a couple of years ago in her popular Now Hear This series at PCS, to showcase the play as a Sloan Commission. The story is a surprising cat-and-mouse game between two scientist, one of whom has several different identities at his disposal—and equally complex reason for creating them.

Also exploring questions of identity is Made in Oregon’s fourth offering, by Portlander Brian Kettler. Personal is a thriller that investigates how personality and especially celebrity can be created as well as dissolved by our society’s avid love of hero workshop. Inspired by a James Tiptree story (though pretty much using the story as a point of departure), Brian’s play is disturbingly funny and thoughtful and, ultimately, like Patrick’s play, a mystery at heart.

Made in Oregon runs during the week of July 11, probably later in the week. You can check specific show times once they’re posted on the JAW website; meanwhile you can read more about these writers here.
Posted by Mead at 6/03/2011 10:44:00 PM