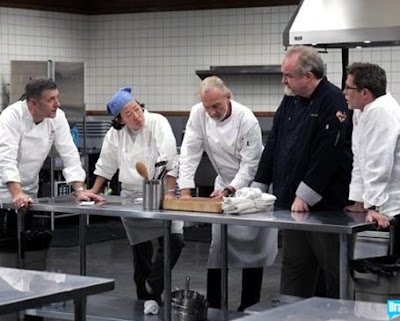 Here at the House of Mead, we gave ourselves up last night to a gluttonish debauch of epicurean delight by watching two editions of Top Chef back to back: first the new batch of fresh-faced recruits on Top Chef Las Vegas, then the frothy climax of Top Chef Masters.

Since we started the evening at our favorite neighborhood hangout, the casually epicurean Lucca, this was a night of total self-indulgence.

Both shows were terrific for diametrically opposed reasons (the seething competetiveness of the up-and-comers, the fraternity of the masters). But may I just say…..Las Vegas? Sure, it’s flashy, and yeah, there are now restaurants there that lack buffet lines. But still. Las Vegas? When they might have hied themselves next to New Orleans, for example. Or Montreal. Or even … if I may … Portland?

Okay, we don’t have San Francisco’s views. We don’t have New York’s street cred or Chicago’s history. But Top Chef PDX isn’t such a far-fetched idea. Between the Gorge and the coast, from Mt. Hood to Bend, there are plenty of photo ops and no end of restaurants that compare favorably with the vaunted Le Bernardin or Alinea. Such as:

Paley’s Place. Reserve well in advance so you can dine in the intimate private room, where the impeccable service complements the flawless food.

Castagna. One of the few restaurants on the planet where you can effortlessly hear your own conversation. This is a bit of minimalist heaven, our haute couture of dining – coolly elegant. Plus the adjoining café has the best bistro fare in town.

Roots. Worth going overseas for (it’s in Camas, Washington, beyond the Willamette, beyond the Columbia….keep going….martini connoisseurs take note, you may have to spend the night.

Le Pigeon. Don’t even think about coming to Portland without paying your respects at this culinary temple.

These few restaurants are chosen almost at random; there are dozens I could just as easily have selected, from the long-established (Higgins, Wildwood, The Heathman) to the new and insouciant (Toro Bravo, Lincoln, Beast), from the cavernous (clarklewis, Wong’s) to the miniature (Bombay Cricket Club, Café Nell), from the classy (bluehour, Andina, Olea) to the kitschy (Le Happy, Voodoo Doughnut), there’s just no end to the eateries. And don’t even get me started on the coffeshops. (Comfy and quiescent Palio, in Ladd’s Addition is my fave – tell no one.)

Quo vadis, Padma? Plan your next bake-off in Portland, k?

The new Nel Centro is really good--I understand the chef used to work New Orleans' legendary Commander's Palace (still the best place I've ever eaten in my life). I'm still trying to find authentic Cajun/Creole in Portland, but, after living in New Orleans, the bar is set pretty high. Roux is gone, and it didn't do that much for me anyway. Acadia gave it a decent shot, but I haven't been there in a long while. The stuff they served in New Orleans' dives blows anything Portland has out of the water. (Sometimes blew the high-end New Orleans restaurants out of the water too, cookin' out of momma's book, don't you know.)

House Of Mead looks strangely like the sort of place a mad King of Bavaria might hide out in. Hmmmm...