On going around and coming around 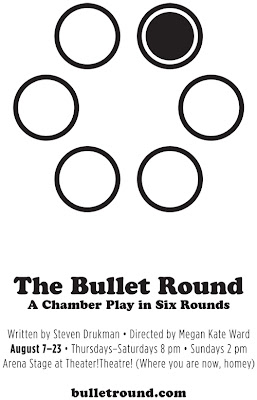 Okay, I’m back from four days in the amazing centrifuge of literary activity known as the Willamette Writers Conference – a wondrous creative tune-up that posits all sorts of possibilities for the future.

By this evening I’ll have a new post on my other long-neglected blog, The Editing Room, and expect a makeover for SuperScript’s website, too. The latter has long required an update thanks to new services I’ve added by sheer force of demand.

Meanwhile, though, I took a brief but rejuvenating intermission in the middle of the Conference for the world premiere of The Bullet Round (subtitled "a chamber play in six rounds), by the endlessly inventive Steven Drukman. Directed by Megan Ward and produced by The David Mamet School for Boys, opening was bumpy in a few spots (the kind of thing that’s worked out by the next performance), but none of that detracted by a wryly amusing, intricately interwoven series of stories with something to say about America’s simultaneous horror of and fascination with guns.

Based in formal terms on Schnitzler’s famous Le Ronde structure, the story traces the progress of a Glock as it’s passed from on individual to another – sometimes reluctantly, sometimes accidentally, and once as an act of personal recuperation. Along the way, the playwright comically exploit weaknesses of character to great effect; nearly everyone in the play is divested of an illusion or two. It’s all excellent fodder for Steven Drukman, whose razor-sharp observations of human foibles borders on the anthropological.

The cast is terrific throughout, but I have to single out Gary Norman for his pitch-perfect portrayal of an acerbic professor who turns out to be more fallible than anyone but himself realizes. Drukman – no stranger to the Jesuitical pontifications that amount to job security in academia – gives us a character too wound-up to trust yet too human for us to judge. Gary’s timing with this portrayal of a man too clever for his own good is flawless.

Thank you Mr. Mead for coming to the opening! So glad you liked it.

Was Steven excited to find himself seated next to Pier Carlo Talenti? How cool is that to come to your premiere in Portland and find that the Mark Taper Forum is represented there!

Man...I could listen to Gary read the phone book.

He was very excited and so appreciative of everything. I think it caught him off guard. What would Pier Carlo be doing in Portland? Thanks again Mead for inviting him.
Steven loved the show. I am really glad he was able to come out.