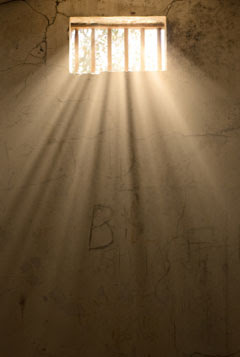 Early in King Lear, Goneril and Regan discuss their father’s erratic behavior. Goneril puts it down to incipient senility, and while her sister is sanguine about this theory, she has a simpler yet more profound explanation:

'Tis the infirmity of his age: yet he hath ever
but slenderly known himself.

We are our own best friends, right? No one knows us better than ourselves, we assume; we’ve known ourselves all our lives! Yet time and time again, it has disconcerted me to notice people whose entire lives were predicated on lies they told themselves so frequently that they came to believe their own press.

Cases in point. Two lifetimes ago in Los Angeles, I worked for an arts organization with someone ostensibly at the helm who was famous for holding forth about the important of honesty. She brought it up all the damn time: the quality of transparency, the value of authenticity. Yet her entire staff and quite a swath of the theater community knew that she was a compulsive prevaricator. A reckless one, lying when she didn’t need to, telling falsehoods she was easily caught in.

Different town in a different lifetime, where I worked for a while with a boss who extolled the spiritual life. He took time out of the office every day to meditate; he liberally quoted the Vedas -- by heart. Yet the man’s vaunted visits to the empyrean heights never seem to translate into actual……behavior. He was callously indifferent to his employees and talked trash about them behind their backs, yet tears would well up his eyes when he talked about the ascended masters.

Why all this always disconcerted me so much, rather than merely amused me, is that it made wonder what illusions I held about myself – what presumed values might I be tediously espousing, when it’s clear to various and sundry that I perform the opposite of what I profess?

Over the years I’ve discussed this again and again with a beloved friend known affectionately, in one particular circle of comrades, as Guru Loopy. On the spiritual circuit, Loopy has done it all: lived on a kibbutz; slaved for EST; formally studied manifesting; dyed every scrap of her clothing in clashing shades of red in exchange for residency at Antelope. That’s a partial list, believe me.

It was Guru Loopy who exposed me to a latter-day system of personality typography called the enneagram. Unlike systems such as numerology or palmistry, which refer to esoteric or mystical causes of personality (at least in some theories, not all), the enneagram profilng is refreshingly pragmatic. The man who developed the system, Oscar Ichazo, simply claimed he and others observed humankind, and noticed they tended to fall into nine main categories – hence points on a nonagon or an enneagram.

When Guru Loopy introduced me to this, the culture seemed to be in a negative phase; all the categories had pejorative titles (mine, #5, was called The Stinge) except for #9, The Peacemaker. Even #9’s dark side was only faintly criticized, as in: “hard time deciding because sees all sides of an issue with equal clarity.” Come to find out, most enneagram advocates are self-professed 9s. Guru Loopy, of course, was and is a 9.

Now that I’m thrust into yet another soul-searching phase, my mind returned to Guru Loopy and the caustic commentary of the enneagrams. Nowadays -- but of course! -- the whole thing has been recuperated to be more consumer-friendly. Judgmental labels are replaced by neutral terms, and most websites on the subject acknowledge that each number has its good side as well as its flip side. Especially interesting to moi-meme is that I seem to have lost a little valence along the way, getting knocked down from a 5 to a 4. Whereas formerly, being a 5, I was:

which raises the interesting question of whether people change, or at least develop, or anyway regress and maybe loop back around again. Or is this just the enneagrm test's reflecting back to me my own state of mind, currently, now that I'm suddenly bereft of an identity 25 years in the making?

But what are you, you ax. You can find out right now. The quick, free questionnaire is available right here. Go ahead; you know you want to. Go ahead and click!

If you do take this brief test, I’d love to hear about your results. Maybe through each other we can get a bead on whether this thing actually works. And/or divest ourselves of another illusion or two while we’re at it.
Posted by Mead at 8/04/2009 08:42:00 PM

I tied - both a 4 and a 7. And they both describe certain aspects of me. When I took the test, there were questions where both answers were right so I just on those I just split the difference. Was it that way for you?

some things about this are accurate, others not. ther are several questions where both answers were true, thus making the forced binariness of the test a recipe for inaccuracy.

Also, the idea that a selfish, manipulative, controlling, ill-tempered and domineering shitbag like Barbara Bush qualifies as a "helper" is insane.

The Reformer: The principled, idealistic type. Ones are conscientious and ethical, with a strong sense of right and wrong. They are teachers, crusaders, and advocates for change: always striving to improve things, but afraid of making a mistake. Well-organized, orderly, and fastidious, they try to maintain high standards, but can slip into being critical and perfectionistic. They typically have problems with resentment and impatience. At their Best: wise, discerning, realistic, and noble. Can be morally heroic.

I also have a lot or #3 and #8 in me. But I must say, on about half of these questions, I could have answered "both" - which is interesting, because on a different personality test I had to take for a school counselor back in 11th grade - I scored something highly unusual, where I was told I literally had two personalities competing within myself. She told me this split would cause me great anguish if I did not shift fully over to one or the other...which was a shitty thing for a counselor to say! But...she was sort of right...it has been a struggle.

Ahhhh...identity. What is the story was try to play out and the one we are actually in?

[Or played backwards: "Turn Me On Dead Man"].

Turns out I'm a Peacemaker, with a side of Helper and Enthusiast. Excuse me now, I have to go be self-effacing while healing conflicts.

You know, Isaac.....Barbara always speaks very highly of YOU.

Interesting we all had questions where choosing between qualities would be a misrepresentation. Longer psychological tests are designed to catch you in apparent contradictions.

Guru Loopy would be the first to point out that the quickie test on the website is cursory at best; the site itself maintains that its brevity makes it open to internal inaccuracies as well as user misidentifications.

("Misidentification" is an intriguing concept all on its own. In this test-spoiling gambit, I might select all the responses that cast me in a saintly light [for instance] because I think I'm the next messiah, when in fact it's apparent to one and all that Im really more avaricious than Jabba the Hut -- see?)

There's a lengthier and presumably more thorough evaluation you can take, but it costs money, so I haven't.

Still, the whole premise fascinates me: that people tend to operate out of one of nine basic personality stellia. What does it say about our capacity for change, I wonder. Or is it just that the more conscious we are, the empowered we are to change, at least potentially? Or maybe it's the reverse, simply putting oneself on the road to self-acceptance, at long, long last.

How funny, Mead--I was just thinking about the Enneagram last week! I believe that I am also a 4--I have been responding to certain stresses in my life the way that a 4 would. But then I also found some information online about how you can be influenced by the types on either side of your primary enneagram number, so I think I might be a "4 with 5 influence", or "Artist with a splash of Nerd"--which sums me up pretty well, I think! Maybe you have something like that going on, too... could explain why you've gotten different results different times.

Oh lord, I took this and tied on not one...not two...no, not even three, but 5 different personality types (2, 4, 6, 7, & 9). So maybe I don't know myself very well, maybe I'm schitzophrenic, maybe this abridged version of the test is just too limited to cover the full nature of human complexity, or maybe I just need to take it one more time.

Though this looks like fun, I think I prefer to remain as much a mystery to myself as I am to others. (Then he disappeared, leaving a curl of smoke and faint scent of brimstone.)

For me: Type Six, The Loyalist.
The committed, security-oriented type. Sixes are reliable, hard-working, responsible, and trustworthy. Excellent "troubleshooters," they foresee problems and foster cooperation, but can also become defensive, evasive, and anxious—running on stress while complaining about it. They can be cautious and indecisive, but also reactive, defiant and rebellious. They typically have problems with self-doubt and suspicion. At their Best: internally stable and self-reliant, courageously championing themselves and others.

I also scored highly on Type Two, The Helper, and Type Seven, The Enthusiast. I found that, when faced with a question where I couldn't choose one answer or the other, I had to ask myself, "How am I right now, as opposed to over the course of my life?" Usually I could pick one answer then. It makes me think that this test reflects where a person is right now in their lives, as opposed to a rigid, permanent identity.

Anatta, people. All things are in flux, including what we think of as ourselves.

So I tied at 3 & 7 and thinking maybe like a "satisfied" and "self-accepting" 3/7 I'm don't need to go any further and pay no 10 bucks to find out exactly which one I am.

I'm pretty much off the charts as type 4, The Individualist. If I had taken this quiz 2 years ago, I would have very likely been a 2.
Somehow, even though 4 is a lonelier number than 2, I can't help but feel I am making a step in the right direction.

I scored about evenly as a 4, a 9, and a 1. Then I didn't have time to read what all that meant. My husband was studying the Enneagram when I met him, and it seemed like a pretty good descriptive grid to me. It's clear but complex enough to mean something.

I'm most interested in this, though: "what presumed values might I be tediously espousing, when it’s clear to various and sundry that I perform the opposite of what I profess" So scary. I know the people I loathe in this life share certain keynotes in their personalities, and sometimes I'm sure that means I'm just like them and don't realize it!