I got your new music right here.

Blame it on the holydays, or blame it on my favorite scapegoat — le media social. I do, and frequently -- not merely for convenience, but because it’s demonstrable (accent on demon) that the siphoning off of communicative impulses into Facebook and Twitter makes blogging seem downright long-form (aka antique).

Culpabilities aside, I firmly resolve, with the help of thy grace, to return to ye olde confessional mode soon. Meanwhile, here’s a fun bagatelle for you. One of my favorite composers in the aggressively moderne style is György Ligeti. Like many, my first exposure to this artist was via Stanley Kubrick, who used Mr. Ligeti’s often disturbing music to great effect in The Shining in particular.

Ligeti doesn’t make for pleasant background music; it’s full of quirks, such as flatulent squeaks and whispered words. Many’s the time I’ve been asked to eject his CDs or, more passive-aggressively, just asked “How can you listen to that?” And my response is that I don’t invariably hear scary movie music. Instead I hear whimsical, playful, even mischievous music.

Q.E.D.: this performance of Ligeti’s Mysteries of the Macabre, as performed by the fabulous Oregon-based new music ensemble Beta Collide, in a video produced by Yachats company BlueDot Productions. Consider this proof positive that new music doesn’t have to be a solemn affair.

Mysteries of the Macabre from BlueDot Productions on Vimeo. 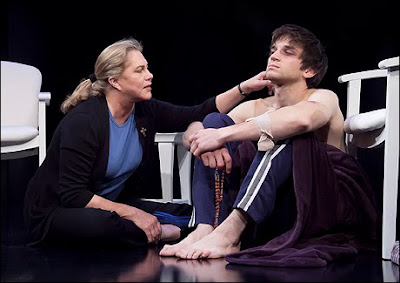 A highlight of my recent trip to see my sainted mother in St Louis was a visit to the Rep to see a new play by Matthew Lombardo, High. As rolling premieres go, this production is something of a stampede; it had runs at Hartford Theater Works and Cincinnati Playhouse in the Park before moving on to St Louis Rep, and the plan all along was to wind up Nueva York — Broadway.

When my mother picked up the tickets, the box office took one look at her and decided to do some pre-emptive deprogramming. “You do realize it’s……gritty?”

This spurred me to go online and find out just how nitty this gritty could get. Apparently the fuss is about the main character — a potty-mouthed nun sans wimple (but avec rosary) who works in a Church rehab service. Enter the challenge of her life in the form of an equally battle-scarred addict, and a shady priest with a mysterious agenda, and the games begin.

How does a lurid three-hander get Broadway legs? By dint of its star, Kathleen Turner. The very idea of sexy Ms. Turner married to Christ yet speaking fluent gutter punk is too delicious to resist. The gambit worked for the Rep; we were there on closing night, and the place was packed.

We got to sit within spitting distance of Ms. Turner, whose legendary smoky voice has deepened to a near-baritone. The woman has gravity; she commands a stage presence you don’t always get from movie stars in live performances. Fortunately for the production, her costars (Evan Jonigkeit and Michael Berresse) are both excellent — as they had better be, to stand up to Ms. Turner’s incandescence. In fact all the production elements are superb; there seems to be nothing else for this show to do but open on Broadway.

It’s interesting to me that St Louis was part of this gradual slouch toward New York. Leafing through the Rep’s program, I was impressed to see ads for about a dozen more theaters than I knew existed in that town. Seth Gordon is now at the Rep, as its Associate AD, where he’ll be kick-starting a new play development wing; he was out of town while I was there, but I was privileged to have lunch with two other noted theater artists, dramaturg Megan Monaghan and director Tlaloc Rivas, both teaching now at U of Missouri. And Carter Lewis has been catalyzing Wash U’s playwriting program for several years now. Looks like I have to revise my assumptions about St Louis being a theater backwater.

Oh, about the box office’s warnings? The putative grittiness came down to occasional blue language, a brief but convincing display of violence, and a smidge of nudity. My sainted mother’s assessment? “I’ve seen worse than that on TV.”
Posted by Mead at 11/13/2010 06:51:00 PM 2 comments: