Did you know that Haruki Murakami has his own web site? Well -- let me qualify -- I doubt very much the man has anything to do with this site. It's a Random House production intended to attract interest in Murakami's books. But if you're a fan, it's fun to wander around in the site's arty fixtures. And best of all is the site's eerie, minimalist soundtrack. It subtly shifts hues and tones, from tinkly to moody to quietly insouciant, and seems to morph endlessly....it makes a great wallpaper while you're paying your bills. Or mulling over what you should have said to your boss. Or musing over Jason Grote's impenetrable calm.

Speaking of minimalism, if you've never read Murakami's writing, do yourself a favor and get ahold of some of it. The short story collection of Blind Willow, Sleeping Woman is great for when attention deficit strikes, but it's the longer piece -- Kafka on the Shore, or Hard-Boiled Wonderland, where HM really shines. Haven't read the latest opus yet, After Dark, but from the way reviewers have described it, it may feel the way his site's music sounds. 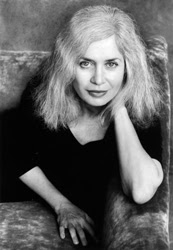 Tom Spanbauer,
Chuck Palahniuk. (Check out CP's entertaining advice about writing at the above link.) Their work has taught me to excise all but the essential in my own writing. (Oh NO, another lit manager who secretly scribbles in his office at night -- it's true, I confess it.) The dashing but fell Palahniuk has a terrifc article about this in his collections of essays, Stranger than Fiction. The photo below is Tom, not Chuck, by the way.... 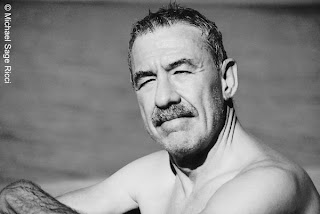 Email ThisBlogThis!Share to TwitterShare to FacebookShare to Pinterest
Labels: writers

Interesting. Haven't read Sempel, have yet to read Spanbauer, but I was an avid fan of Palahniuk once, and I have to say that I've never particularly thought of him as minimalist. Early Carver, perhaps, but not Palahniuk. Just out of curiosity, how are you describing Minimalism, O Sage Lit Guy?

To me, minimalism in literature simply means that there are no more words than necessary to put across the narrative; everything is lean and spare and the reader can pore her/his own imagination into the writing. Example: I used to be a terrible -- well, even worse than I am now -- about qualifying adverbs, as in "slowly he turned," or "she said wryly." And reading Spanbauer and others I found out you don't have to do that -- you can let context and dialogue and spare flashes of imagery to do that for you. One way Chuck does this yes I call him Chuck,so intimate I imagine myself to be with him after reading his work)is through constantly developing fugues of repetition, so you come to know what a character's nervous tics are.

You could well ask: doesn't every novel play poem apparently have exactly what it needed. Um -- no. Take many of the books that make it to the mass market level, novels by Stephen King or Judith Krantz. Make it through the full novel, then listen to the abridged version as an audiobook. Usually the abridged version is a significant improvement. Aha!

Theater has its minimalists, too: Barry Kaplan's The White Room, or any of the work of Russell Davis. Sally Oswald. Gordon Dahlquist, in a way, even though he's certainly not terse, but there are no "extra" words in his dialogue.

Sure. The question is, what constitutes the bare minimum? Simply writing a text that is clean of adjectives and adverbs still leaves open a wide range of possibilities for deep, detailed storytelling that has nothing to do with what the reader has filled in or not. Lean, mean writing is not necessarily minimalist. While Palahniuk definitely tends to lean that way, Spanbauer - the snippets of his writing I've heard others read out loud, that is - can be downright luxurious in texture and detail. Early Carver was like that too, before he went all 'Cathedral' on us.

And yes, I will 'pimp out' my blog soon. It cracks me up to imagine you saying that out loud. 'Pimp out.' (snort!)

That's the amazing trick of it; Tom Spanbauer's language can sound downright lush, yet if actually look at the words on the page as such, it's surprising how little is overtly descriptive. He lets his characters, and espeically the narrative voice, intimate for you what he has not needed to actually say. It's admirable sleight of hand. The new novel, Now Is the Hour, does this deftly, and the result is that it's moving without ever being even fleetingly sentimental.

But you're right, this need not be called "minimalism." I'm simply latching on to a convenient term --just like a real litcritter!!!

Impenetrable calm? That's the first I've been called that. But thanks!

Hence the typical confusion - minimalism in construction, not of structure or story. An important distinction, and a reason why the term gets misused so often. By the way, I meant to say earlier that early Carver (you have a hard on for Palahniuk, I have one for Carver, and we all dance a little jig) was minimalist at first, and got more luscious and detailed as he went on. The previous message was confusing, and I am nothing if not specific.

By the way - the new blog is officially pimped out, yo. Visit it. Word to your mommy.