Why not admit it. While I’ll always love script-reading (how can I not, with new works by Naomi Iizuka, Lynn Nottage and Will Eno coming down the pike), it’s been grand to have the leisure, of late, to read, well….other things. Can you blame me? I figured out that my reading for PCS alone averaged out to more than one script a day.

Among the books new to me is Debra Gwartney’s outstanding memoir, Live Through This, which chronicles the harrowing account of her family’s near-dissolution, following a distressing divorce and the a transplant from the Southwest to the Pacific Northwest.

Ms. Gwartney has four daughters, and the two elder ones, while still in their early teens, drifted into a rebellious homeless. Just think of that; what would you do if your children forsook the comforts of home for a life on the streets? Consider all that could entail. And shudder.

If I didn’t know from the start that the book had a happy ending (albeit a qualified one), I don’t think I could have continued reading. Of course, the author’s lucid, unflinching prose helped. She is self-deprecating without being self-flagellating; her writing has a confidential tone, as though she’s speaking to a friend she knows is strong enough to hear her out without coddling her or criticizing her. And even though the author posits her story in her own clear voice, you still feel that this could be your own family history, if not for the slightest adjustments of circumstances. 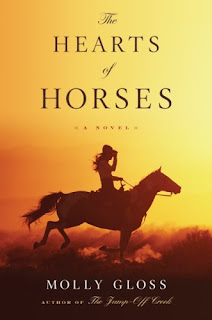 Now a different kind of confession – my own. I bought Molly Gloss’s latest novel, The Hearts of Horses, nearly a year ago. In spite of the author’s well-deserved reputation for fine writing, I kept putting off reading this particular book. Partly it was the title, and partly it was the jacket blurb, which mentions a young lady winning the respect of a rural community through her devotion to horses.

I’m glad I got over myself, because I feel enriched and fortunate that I got to know the community this story delineates. This is the sort of novel where you turn the last page with a poignant regret, being unwilling to give up your kinships with the vivid citizens of this Eastern Oregon outpost. Some of these people are remarkable, but most of them are ordinary; it’s the author’s keen eye for the telling detail that gradually renders them into people you feel you’ve met.

Probably you’ve heard of the best-selling novel The Art of Racing in the Rain, by Seattle writer Garth Stein, which is a dog’s story told by…..the dog himself. Yes. You recoil, I know. But actually a number of notable novelists have penned stories with dogs as their narrators – Virginia Woolf, for one (Freshwater), and of course Jack London (The Call of the Wild, White Fang). But still, let’s acknowledge it, the first-person dog yarn is an unpromising premise, replete with potential for twee sentiment. 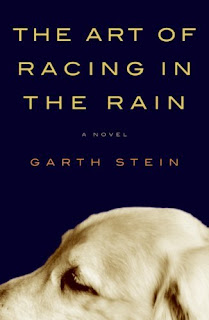 Stein, however, mostly gets away with this because in his novel, Enzo the dog is the most fully fleshed-out character of the story. Whereas I expected a canine to serve as a mere foil for the humans of the story, Enzo surprised me by being the character I cared about most. Probably this is because while events happen to the people in his life (and happen to them aplenty), Enzo is the one who processes those events, ultimately becoming a more complex individual (yes, individual) than anyone else in the book.

For reasons I can’t go into without blunting the story’s impact, it turns out this dog’s life is about more than his humans’ problems, and also about more than racing and rain. Or that’s how I read into it, anyway. As humans, we’re natural born anthropomorphists; we can’t help but project our own feelings onto other beings, from the actual (e.g., our pets) to the fabulous (constellations, deities, vampires). Perhaps this is especially true of dogs, whose brief life spans show us ourselves in miniature; we can’t help but invest them with our own foibles – and aspirations.

In breve: resist this story as best you can, but you’re likely to fall under its spell just as I did.

By the way, I published somewhat different versions of these reviews on Buzzaroonie, a book review site I’ve been enjoying. Check it out if you’re a fellow bibliomaniac.
Posted by Mead at 5/19/2009 10:59:00 PM

I will be down in Ashland enjoying some theater and wine...and of course visiting Bloomsbury Books. Now I know what to pick up while I am there. You are sooo thoughtful :)

I wasn't a careful reader the first time through this post, so I was racing through it to find out what the new Spanbauer was! alas, then I started over and realized you said "rereading..." sigh. But I will pick up the other books for summer reading!