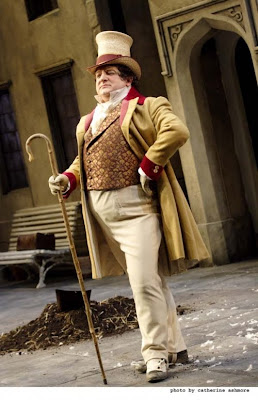 Conventional wisdom in English-language literature has long dictated that certain “canonical” works are must-read classics for all(Adventures of Huckleberry Finn, e.g.) while others, though arguably brilliant, are GSO — for grad students only (e.g., The Mill on the Floss).

The canonistas dump Dion Boucicault (above-captioned phonetically for your convenience) into the latter category, and unjustly. His shamelessly commercial plays, dating back to the mid- and late 19th century, were immensely popular in English-speaking theaters of their day. In due course their hegemony (!)(sorry, grad school jargon dies hard) got dethroned by none other than our old friend Oscar, whose megahit The Importance of Being Earnest managed to have it every which way with these comedies — he lampooned them, yet honored their methods at the same time.

Dion’s very first hit in a long and storied career was London Assurance (1841), and it’s been enjoying a renaissance in recent years thanks to such theater visionaries as Sam Mendes and, currently, Nicholas Hytner. We can see Mr. Hytner’s National Theatre production this coming, on July 17, thanks to Third Rail Rep’s NT Live presentation. I’m going to the matinee performance (2pm), so please come to that showing so I won’t be all alone. If you can do without my company, however, there’s also a 7pm showing.

If you haven’t been to an NT Live showing before, you’re in for a real treat. These are broadcasts of live National performances -- notable productions that allow you to see excellent London theater without the bother of a transatlantic flight. 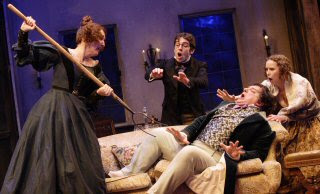 And what of London Assurance itself? The character names give you a clue; there are servants named Pert and Cool and a lawyer called Meddle. There’s also an aging fop named Sir Harcourt Courtly (which I think should be my new nom du guerre) and a “horse-riding virago” known as Lady Gay Spanker, who refers to her submissive husband as Dolly (which actually IS one of my many monikers). There are attempts by the older characters to lech off the younger ones, but you may suspect from the start that young lust will prevail in the end — even it takes some saucy gender-bending along the way. Throw in the acting talents of Fiona Shaw and Simon Russell Beale, among other luminaries, and you’ve got yourself a classic — the kind you actually enjoy.

Think of it as grad school, but without the tears and caffeine-laden overnighters, and with all the romantic hijinks. See you there.
Posted by Mead at 7/11/2010 11:17:00 AM

Very cool! Have been lucky enough to see several performances at the NT in my travels....almost always a unforgettable performance.

Mill on the Floss is not just for grad students :D I had an english teacher in high school introduced me Elliot (Evans) I am forever greatful to her for that.

You certainly won't be alone, Dolly. We've had our tickets for weeks, so we will assuredly see you there. And while I'm at it, let me echo your comment about the sheer joy of these NT events. (This will be our fourth).

Thank YOU, Dolly! It will be good to see you (all) there. And FG, I totally agree with you about The Mill on the Floss -- a great novel and a terrific read. I just grabbed that title because, as a student, I remember being dismayed by its sheer heft. But it's worth it. I was listening to the climax on the book on tape once in Los Angeles while traveling through a raging rainstorm where the roads were completely flooded -- I was floating away just like the book's characters -- life imitating art!

Love Boucicault. I saw a production of "London Assurance" years ago; can't even remember where -- Ashland, maybe? -- and was impressed with its commercial savviness: in our time or slightly before, he'd've been somewhere between Simon and Sondheim. Then I found a good bio of Boucicault and got swept into the whole fantastic world of the 19th century theater. Haven't read it in ages, but I still have it on my shelf. It's called simply "Dion Boucicault: A Biography," it's by Richard Fawkes, Quartet Books, copyright 1979, and I recommend it.

I am so there!